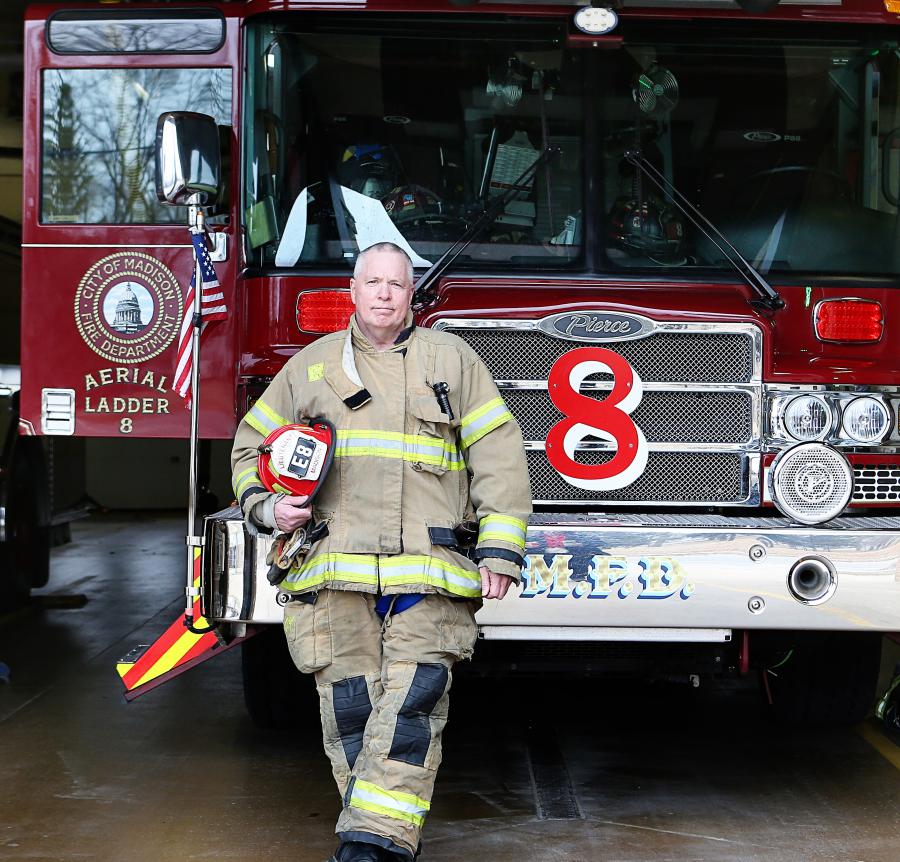 The Madison Fire Department bid farewell to Lieutenant Rick Mulhern earlier this month as he capped off a 25-year career with the MFD and three and a half decades in the fire service.

“It was nice to come home,” he said of being hired by the department that would remain his home for 25 years.

Mulhern’s first assignment was at Fire Station 1 in the heart of downtown Madison where he served on the Lake Rescue Team. During his five-year stint at Station 1, the city saw rapid growth which included the construction of the Monona Terrace Community and Convention Center and the Kohl Center on the UW-Madison campus.

From there, Mulhern moved to Fire Station 5 on the east side before being promoted to Apparatus Engineer, an assignment that took him to Station 2 and Station 7 on the west side.

“That was interesting for an east-side kid, finding my way around there,” he said with a grin.

In 2010, Mulhern was promoted to Lieutenant and assumed his post at Fire Station 8 back on the east side. Alongside, Lt. Doug Freese, Mulhern headed up Station 8’s ‘B’ shift for the previous eight years and served as a leader of the department’s Heavy Urban Rescue Team (HURT).

“Freese’s been great to work with,” Mulhern said of the partnership. “We’ve been together so long that you kind of know what everybody’s doing on a call.”

Cohesion is critical for a team that specializes in high-stakes rescues like building collapse, high-angle rescue, trench rescue, silo entrapment, and a variety of other unimaginable scenarios.

Mulhern’s prior experience with the La Crosse and Wausau Fire Departments’ technical rescue teams, alongside his personal interest in rock climbing, gave him a leg up when the Madison Fire Department began forming its own Technical Rescue team. When the MFD revamped the way it staffs the special teams, Mulhern had a decision to make: Stick with Hazmat or head over to HURT.

“HURT was my first love,” he said. “That’s always been my niche on the department.”

Significant events in the 1990s and early 2000s—including the bombing of the Alfred P. Murrah Federal Building in downtown Oklahoma City, the terrorist attacks on the World Trade Center in New York City, and even the collapse of the Pharmacy Building on the UW-Madison campus—invigorated a widespread investment in special rescue training and equipment at the local, regional, and federal levels. Mulhern was among those who were instrumental in developing the skills, tactics, and procedural best practices that kept MFD's HURT on the cutting edge.

"The hard thing is there’s so many different disciplines on some calls, you may use a bit of everything,” he described. “You might be lowering rope, doing confined space, and shoring all in the same call. A lot of different training is required to keep up with that.”

While Mulhern’s legacy within the Madison Fire Department is closely associated with HURT, he’s also particularly proud of the recent formation of the MFD’s Peer Support Initiative.

With just a year-and-a-half left on the job, Mulhern was tapped in 2018 to lead the initiative as its program coordinator—a testament, his colleagues say, to his skills as a leader and his ability to bring people together. He hesitated initially, until he saw the numbers: Firefighter suicides are now exceeding the number of line-of-duty deaths. 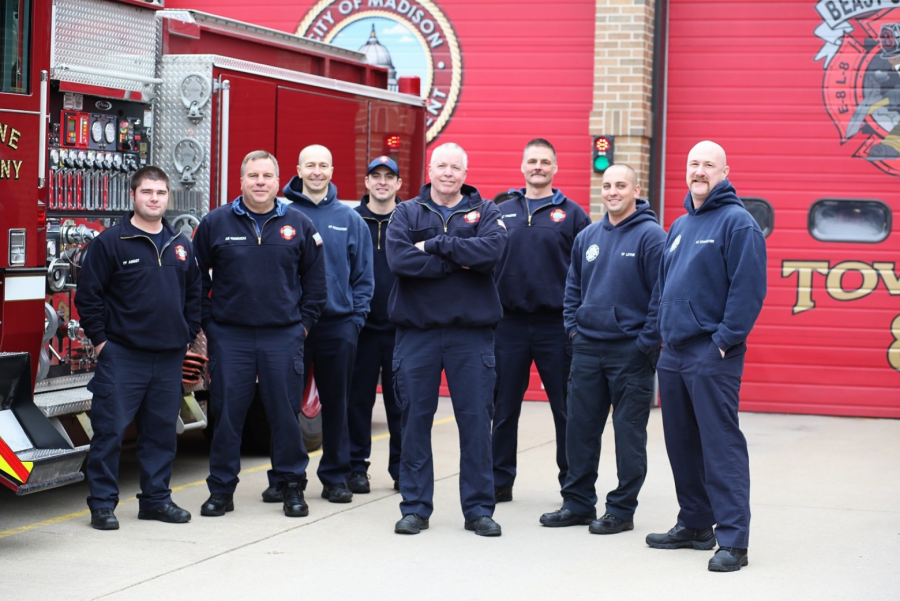 “One thing I’ve seen in my career is the way we took it for granted that there were going to be 100 firefighters killed in the line of duty each year,” he said. “For all my career, there’s been a huge focus on safety … and we worked hard to get those numbers down. Now I think we need to shift that [approach] to mental health.”

Historically, mental health has been a difficult topic to discuss in the fire service, but Mulhern sees the culture shifting, and departments are beginning to recognize the importance of looking after responders' emotional wellbeing.

“We don’t tell someone with a broken leg or cancer to ‘shake it off,’” Mulhern said. “I’m glad we’re hopefully starting to get over that a bit [with regard to mental health].”

Although he steps down from his responsibilities as the Peer Support program coordinator, Mulhern plans to stay involved with the initiative during retirement. He’ll also continue to serve as a safety officer for the State of Wisconsin’s Task Force 1, and he’ll keep hanging on to the ropes in his free time with more rock and mountain climbing on the horizon.

“I’ve spent one-third of my life sleeping in these little beds away from my family, with my second family here. It’s not easy saying goodbye.”

What His Crew Has To Say

Saying goodbye wasn’t easy for the team, either. Here are some testimonials and well wishes from Station 8’s ‘B’ shift:

“To the person who is a forward thinker and builds a winning team by empowering others… It was wonderful to start my career under your supervision. I'm honored to have worked for you and blessed to have been taught by you. Farewell, Lieutenant.”
– Firefighter Marta Darrow

“Lt. Mulhern has been a pillar of the MFD Heavy Urban Rescue Team since the beginning. He is a field expert who will be difficult to replace.”
– Firefighter/Paramedic Jered Tennant

“I couldn’t have asked for a better mentor, from the early stages of my MFD career at Station 2 to over the past six years at Station 8. You have led with compassion and patience. Whether on a HURT call, fire call, EMS call, or during training, I have always felt safe under your guidance. This feeling of security is one of the many things that has given my family some peace when I’m away from home. For this, my whole family thanks you.”
– Firefighter/Paramedic Jon Frank

“You are a role model on and off the job.”
– Firefighter Kevin Kruchten

“Lt. Mulhern was one of the most generous and kind-hearted people I’ve ever known. As they say, he’s one in a million. He came to work willing to teach and always willing to put up with 8B’s wonderful personalities. He had a smile on from morning to night, and maybe at times started the banter and jabs between the members of the crew. What I think Lt. Mulhern enjoyed the most, besides all the rope training he put us through, was the many times he would send us GIFs on all our phones, and how he felt so proud he did that from his Apple 4 flip phone with the cracked screen. He will be missed and was one of the best lieutenants I have ever had.”
–Firefighter Ali Langer

“What can you say about Lt. Mulhern? He was always a patient teacher. He could teach a puppy how to tie knots (and probably has). Quick-witted, willing to be self-deprecating, never afraid to work hard. Difficult HURT trainings were made easy with Mully in charge. It was a little-known fact that he wasn’t afraid to ‘suggest’ a few pranks now and again, and then stand idly by while it was executed down to the finest detail to the unknowing victim(s).

“But to those of us who know him, these aren’t the character traits that endeared us to him or made us willing to walk through walls for him if he asked. It was how he treated his subordinates on a daily basis. A quiet check-in between trainings; a quick conversation about your kids, parents, spouse, friends, or coworkers; and a kind word of advice in a stressful moment is what made his leadership something very special.

“At the end of the day (and sometimes it was a VERY long and stressful day), people want to know that their leader cares about them. With Mully, there was never any doubt. You knew he cared about what happened to you, at work, and in your life! His leadership and caring will be greatly missed.

This content is free for use with credit to the City of Madison - Fire and a link back to the original post.
Category: General, Station 8
Tags: Meet the MFD