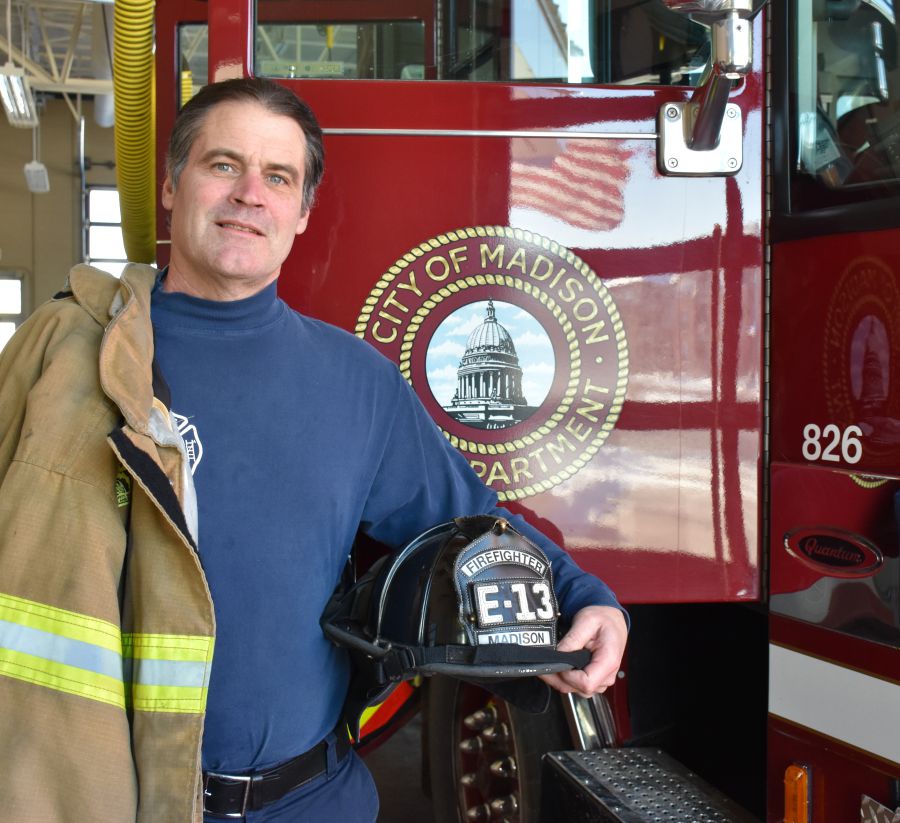 After 28 years with the Madison Fire Department, firefighter Marc Behrend hangs up his gear one last time, bringing a six-generation, 150-year legacy to a close.

Since 1867, there has been a Behrend on the MFD roster, taking the family’s lineage all the way back to the department’s volunteer days.

It’s no surprise then that the MFD was a prominent part of Marc Behrend’s childhood.

“We would go to the fire station on all the big holidays — Thanksgiving, Christmas,” Behrend remembers. “All the people and camaraderie — the whole experience — I always knew I wanted to be a firefighter, too.”

Before diving into firefighting, Behrend made a name for himself in the hockey arena. After helping to bring the UW Men’s Ice Hockey team to national acclaim in the early 1980s, he competed with the U.S. National Team at the 1984 Olympics in Sarajevo. He went on to become a goalie with the Winnipeg Jets for four years.

Eventually he returned to Madison and worked with the City Streets Division on the west side. A year later, he applied for a spot on the Madison Fire Department and earned the opportunity to join the Academy in October 1988.

“I think I was pretty well-prepared coming on the job, knowing what it was going to be,” he said. “But you don’t really know until you do it. The first time you ever really go into a fire, it’s different.”

One such fire was a blaze that destroyed a fraternity house on Langdon Street in 2008. Behrend recalls working on the third floor of the house when the fire “really kind of got away” from the crews. Beneath them, the second floor flashed over, and he and his fellow firefighters tumbled down the staircase and escaped.

“We came out very nervous. I think I was more in fear of my life there than any other fire I’d been in,” Behrend recalls. “A rookie on our crew came up to me with eyes as big as saucers and said, ‘Are they all like this?’ I said, ‘No, thank God they’re not!’”

As a former Badgers hockey star, it was fitting to start his firefighting career at Station 4, “Bucky’s House.” He was eventually assigned to old Station 7 on Raymond Road for a few years before transferring to Station 9 on Midvale Boulevard, where he spent the majority of his career. He also served at Stations 2 and 12, and he’s been based out of Madison’s newest fire station, Station 13, since it opened in 2013.

While firefighting had been part of ‘the family business’ for over a century, there wasn’t much talk of it between Behrend and his father, Phil, who spent most of his career on the ambulance. Phil Behrend, Jr., retired from the MFD for just over 20 years ago.

“I’ll still tell him things (happening in the department) and he always has an opinion on whether it’s good or bad,” the younger Behrend said with a grin.

Although their careers overlapped about seven years, the father-son duo only got to work together once, in 1988, at Fire Station 4.

“It was kind of strange working with your dad like that and seeing him in a completely different role, but it was fun,” Behrend said. “I’m glad we were able to do that.”

Phil Behrend served at the MFD for close to 40 years. As Marc’s 28-year career comes to a close, he reflects on his father’s longevity. He says he couldn’t match it, but he’s happy his father is able to see this day and celebrate the sunset of a successful career and a long family legacy.

Marc Behrend has two children, a daughter and a son. Neither has pursued firefighting yet (his daughter is a registered nurse, and his son is finishing up his Associates Degree while working as an assistant hockey coach), but he hopes his son might pick up the torch someday.

In the meantime, he looks forward to spending more time with his family now that retirement is just around the corner, and he plans to stick around Madison. As he steps out the doors of Station 13 after his last shift on December 30, 2016, he does so with a deep sense of gratitude.

“The group of people on the fire department are a really special group of people,” Behrend said, pointing to his colleagues who devote their careers to putting others ahead of themselves.

“I always enjoyed coming to work. I’ve always laughed at the fire station; I’ve always had a great time here,” he said. “I will miss that.”

This content is free for use with credit to the City of Madison - Fire and a link back to the original post.
Category: General, Station 2, Station 4, Station 7, Station 9, Station 12, Station 13