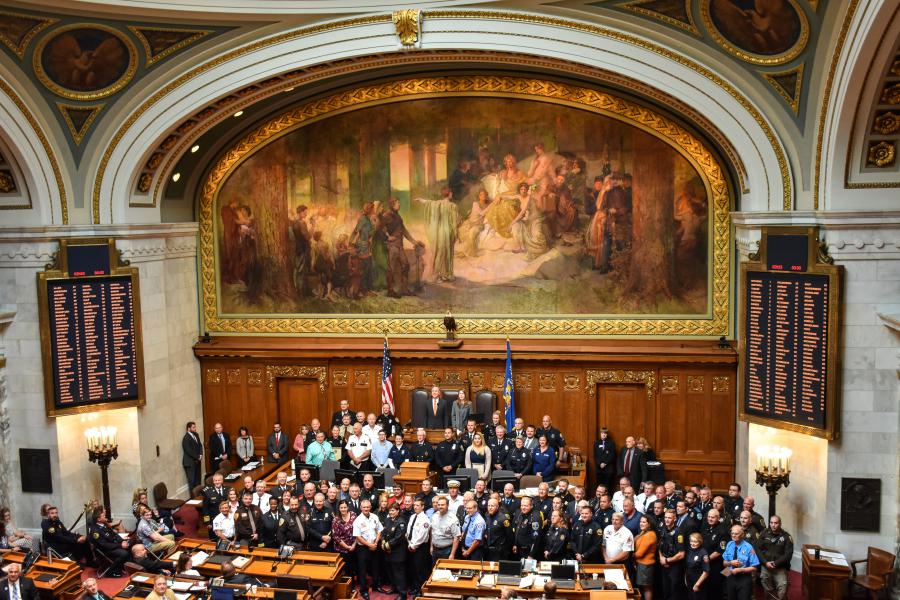 Sometimes the call of duty beckons when you're off duty.

On March 8, 2019, a group of family and friends from South Wayne were headed to the Wisconsin state basketball tournament in their Suburban when they were involved in an accident with a semi. The crash occurred just south of New Glarus.

Not far behind was Ron Blumer, a lieutenant with the Madison Fire Department, who was on his way to his other job as a fire instructor at Madison College. He came upon the accident before anyone had a chance to call 911.

The SUV was on its side with bystanders talking to people inside. Blumer approached the sunroof and peered inside.

"The first thing I noticed was that people were still inside, gasoline was spilling everywhere, and I knew we needed to start getting people out in case it starts on fire," Blumer remembers.

Off-duty and lacking the team and tools he'd normally have to aid an extrication process, Blumer confronted the challenge head-on.

He and some bystanders were able to free two people through the sunroof and then entered the car to free the others. He came upon one passenger who was not breathing and could tell his airway was compromised. Blumer was able to get him breathing again before first responders arrived.

Once New Glarus EMS and New Glarus Fire arrived, they began to extricate a patient who was pinned underneath the vehicle, as well as the people inside. Blumer remained inside providing additional care until the last person was extricated.

The Monticello Fire Department, where Blumer volunteers as a captain, helped with extrication and patient care. Additional EMS services were provided by Monroe, Albany, Belleville, Blanchardville, Brooklyn, and Fitch-Rona.

Blumer was asked to ride with Monroe EMS to the hospital and continue assisting with patient care.

All passengers survived the ordeal, and Blumer was honored for his off-duty acts of heroism with a plaque from New Glarus EMS. Last week, he was also recognized by the office of State Representative Sondy Pope as one of Wisconsin’s “First Responders Of the Year.”

Blumer still keeps in touch with the family and friends he helped. After a couple weeks, he visited them at the UW Hospital and they have met for lunch regularly ever since.

Blumer accompanied the boy who wasn't breathing to his first physical therapy appointment, and he walked the boy out of the hospital once he was well enough to be discharged in May.

"It was an honor,” Blumer said. “I helped wheel him in and then I got to see him walk out."

In an award presented by Rep. Taylor’s office, Burrus was recognized for her 24 years of service as a professional firefighter in the Midwest, and for “overcoming segregation and gender bias in the United States Army, attaining the rank of sergeant while serving overseas.”

This 2019 Hometown Hero Award was presented “in recognition of her selfless dedication to educating and serving the Madison community.”

This content is free for use with credit to the City of Madison - Fire and a link back to the original post.
Category: General
Tags: Awards & Recognition