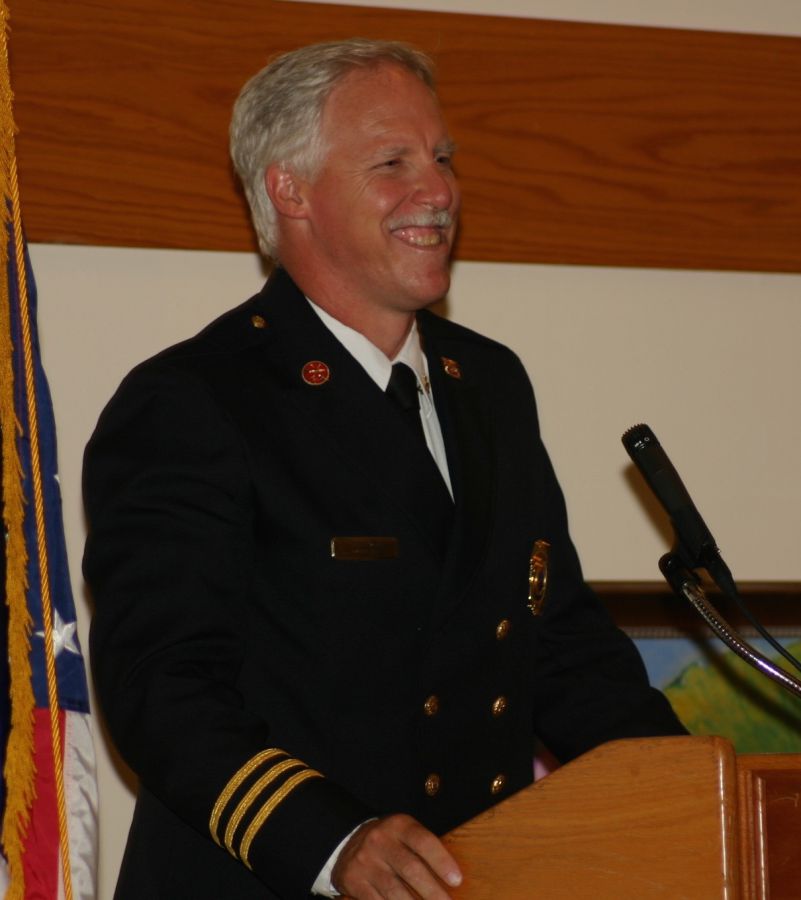 “This career has given me more than I’ve given it,” says retiring Division Chief Ron Schwenn as he reflects on 33 years in the fire and emergency medical services.

Schwenn came to the Madison Fire Department on June 1, 1987 after four and a half years as a firefighter and paramedic with the City of Janesville.

Yearning to serve on a larger department that sees more action, he first looked to Chicago before realizing that Madison was a much better match.

“Southern Wisconsin beats everywhere I’ve ever lived,” he says. "I wouldn’t trade this for the world.”

Fresh out of the Fire Academy, Schwenn was assigned to ride the ambulance as a paramedic out of Station 4 (Monroe St.) before moving to Station 1 (Dayton St.) four months later.

“It was a ball working downtown,” he says of working on the busiest ambulance in the city.

After a stint at Station 3 (Williamson St.), Schwenn was transferred to Station 6 on Park St. (“C” shift) where he enjoyed great camaraderie among the crew there— a company that stuck together for years and served as the first Hazmat specialists when the MFD implemented the Hazardous Incident Team.

He says some of his fondest memories are with that crew. “We grew up in our career together.”

“Because of what we do, we get to see and be a part of unusual things,” he says. "That’s fantastic!”

Indeed, communities thrive and people survive because first responders like Schwenn fearlessly dive into difficult situations— and do so enthusiastically.

“I love pressure, I love challenges,” he says.

In his time with the Madison Fire Department, he and the crews he’s worked with have pulled eleven people out of fires. He says that’s a fairly high number for a firefighter.

“Most of us are involved with putting fires out [where] most people are evacuated without being unconscious,” he explained. "For whatever reason, I was in the right place at the right time.”

One of those places was the Rennebohm Pharmacy Building, across from University Hospital, after it collapsed in June 1999.

Schwenn was the lieutenant in charge of the Heavy Rescue Squad that day when a construction worker was pinned underneath concrete and a metal girder. After hours of unsuccessful attempts, the Squad was ultimately able to free the trapped worker, who now pays a phone call to Schwenn every year on the anniversary of the collapse.

Retiring at 53, having faced countless harrowing situations, Schwenn hasn’t lost the youthful sparkle in his eye— the same one he likely had when he entered the fire service over three decades ago.

He’s grateful to have worked with highly capable colleagues and officers who helped him become a better firefighter, paramedic, officer, and leader. As he advanced in his career, he resolved to provide the same mentorship to the up-and-comers.

Thousands of Madison’s residents and visitors have also benefited from Schwenn’s contributions, perhaps without realizing it. As Division Chief of Field Operations, Schwenn has been the MFD’s primary point of contact when a large event is in the works.

From Taste of Madison and Shake the Lake to Ironman and Freakfest, Schwenn’s keen eye for potential threats to life and safety ensured major community events were safe for participants and attendees, and equipped to provide adequate care if medical emergencies occurred.

As he turns in the keys to Command Car 31 in exchange for more time with his 1972 Chevy Nova "muscle car," he walks away with immense appreciation — not just for the department that gave him a rewarding career, but to the people of Madison as well.

He says the community has taken good care of the fire department, and it’s being repaid by having a high-quality workforce ready to help in people's darkest moments.

“They should be proud of the department, and they should use it whenever they need it,” he says.

With that trademark enthusiasm and shining grin, he adds, “Call us - we’ll be there!”

This content is free for use with credit to the City of Madison - Fire and a link back to the original post.
Category: Station 1, Station 3, Station 4, Station 6
Tags: Meet the MFD