Basement Fire at North Side Apartment Complex Under Investigation

Everybody evacuated safely after fire was discovered at a north side apartment complex Monday afternoon. Seven households were displaced as a result of the fire, which remains under investigation.

Engine Co. 10 was dispatched to the 500 block of Northport Drive to investigate reports of a fire alarm sounding. While en route to the apartment building, multiple callers dialed 911 to report fire and smoke. Additional fire crews were automaticlaly dispatched as part of a full structure fire response.

Upon arrival, firefighters noted brown smoke coming from a basement window with the window frame on fire. Engine Co. 10 began fire attack, and Ladder Co. 6 and Medic 10 performed search and rescue. Crews confirmed everybody had made it outside safely.

After initial fire attack and knockdown, crews continued to put out hot spots and check for additional fire spread. With overhaul still underway, firefighters standing outside the building noticed wisps of smoke coming from the roof line. Crews ascended to the roof and also searched interior walls on the first and second floors of the building. They confirming that fire was still spreading through the pipe chases. Fire attack continued until crews were confident that all fire was caught and fully extinguished.

This fire forced the displacement of 15 occupants. The American Red Cross responded to provide assistance to those who were displaced. Thanks to working smoke alarms and swift evacuation by all occupants, nobody was hurt during the incident.

Initial damage estimates are around $350,000. Fire investigators are still working to determine the cause of the fire. 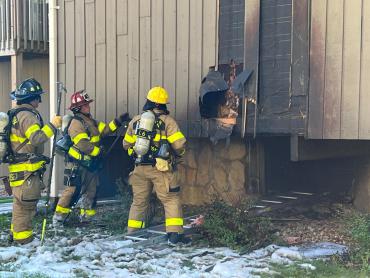 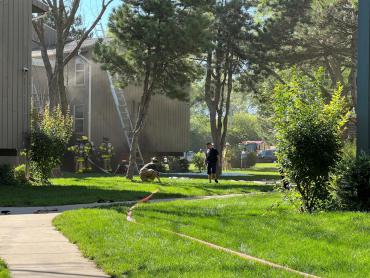