Fires At MGE Substations Are Out; Not Believed To Be Intentional

The fires that occurred this morning at two MGE substations remain under investigation, but Fire Investigators believe the fire was not intentional.

The Madison Fire Department was called to 722 E. Main Street at 7:50 a.m. for reports of a "massive fire" at the MGE substation located there. A full structure fire response was dispatched to that location along with an additional fire engine and ambulance.

Firefighters immediately began an aggressive fire attack that kept the fire contained to the immediate area. Crews used a foam concentrate during this fire attack due to the unique nature of the fire. Truax Fire was also called to provide mutual aide and additional foam. The fire at 722 E. Main Street was declared "knocked down" at 8:50 a.m. with no injuries reported.

Meanwhile, a second fire was reported at 8:03 a.m. at the MGE substation near East Campus Mall. A brief evacuation order was put in place for nearby dorms, and that order was lifted as soon as the fire was extinguished. No injuries were reported at this fire.

Several MGE customers reported loss of power, and traffic lights were impacted in the vicinity. As of 10:30 a.m., traffic lights around the Capitol and downtown isthmus corridors remain out of service. Madison Police are directing traffic at certain intersections, and motorists are advised to proceed with caution at uncontrolled intersections.

This report may be updated with more information at a later time. 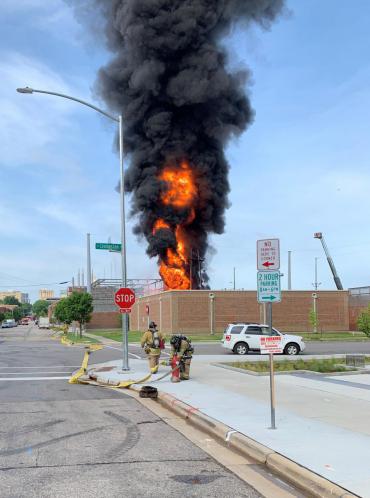