One person was injured Sunday morning after being thrown from his boat when it hit a rock near Picnic Point. Although the boater was wearing an inflatable life vest, the life vest did not inflate properly. He was able to stay afloat until another civilian boat came to his aid.

Meanwhile, the MFD’s Lake Rescue Team responded, locating the 16-foot fishing boat with a 50-horse power tiller motor circling on its own at approximately 10 miles per hour. Upon being flagged down by the bystanders, Lake Rescue pulled up to the injured boater. One rescuer got in the water and assisted the patient on to the Lake Rescue boat using the boat’s hydraulic ramp. Once on board, the injured boater was taken to shore to be transferred to paramedics. Medic 4 transported him to a local hospital with non-life threatening traumatic injuries.

Lake Rescue 1 returned to the site of the wayward boat still spinning on the water with approximately ¾ of a tank of gas left. As they awaited assistance from the Dane County Sheriff’s Office marine unit, MFD’s Lake Rescue Team worked to gain control of the boat using their available resources—and some ingenuity.

While circling the boat, the team grabbed their center point anchor and tossed it into the moving fishing boat. The anchor's rope naturally wrapped around objects inside the fishing boat, and the Lake Rescue Team was able to control the front half of the boat. While keeping their own boat in motion, Lake Rescue forced the fishing boat to follow along behind it.

Now with the Dane County Sheriff’s Office marine unit on scene, one MFD Lake Rescue team member hopped on to the Sheriff’s boat and then to the fishing boat. Once in the fishing boat, he was able to turn off the ignition, and the boat was towed and secured to a pier. 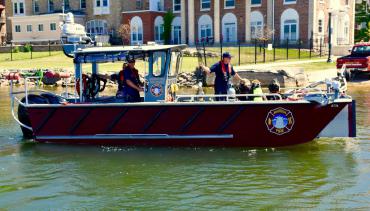 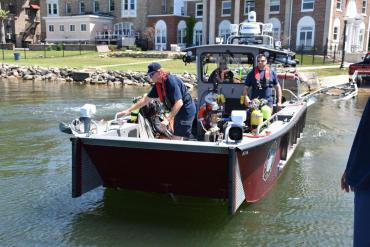