Three Swim To Shore Uninjured After Motorboat Catches On Fire

From Law Park, Medic 3 could see a small jet boat fully involved with fire approximately 75-100 feet offshore. Three people who had been on the boat jumped into the water and swam to shore. MFD paramedics assessed the individuals, who were uninjured, and provided them towels and blankets.

Meanwhile, the boat continued to slowly drift toward the east as Lake Rescue 1 approached. The burning boat began to threaten a floating dock nearby.

The Lake Rescue Team’s rescue boat is equipped to fight fires using an on-board master stream that can flow up to 500 gallons of water per minute. The team positioned themselves for fire attack and knocked down the boat fire. They continued to use the master stream to push the totaled boat closer to shore at Law Park, where it was secured with rope. Firefighters used water can extinguishers to put out any remaining hot spots.

The owner told firefighters he recently purchased the boat. It was operating without issue until, after being turned off for a while on the water, it would not restart. During repeated attempts to restart it, the motor flashed, sparking the fire and forcing the occupants to jump ship. 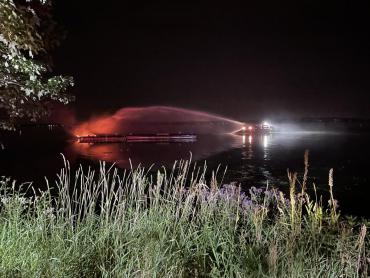