Yapp served the City of Madison Fire Department for 24 years, from March 1982 to March 2006. He played a critical role in the leadership and development of the MFD Lake Rescue Team from its inception in 1983.

“Yapper” saw its first call on March 1, 2020 after a man fell through the ice of Lake Waubesa on his snowmobile. The MFD Lake Rescue Team was dispatched to ensure the safety of the man after being exposed to the cold.

While the previous airboat was only a wintertime resource for the Lake Rescue Team, the new airboat has year-round capabilities. It can traverse water and ice conditions in the winter, as well as marshy areas and flooded terrain in the summer. Technological upgrades and new design features enhance the team’s ability to execute successful search and rescue operations. Notable features include:

The airboat will reside at Fire Station 1 in downtown Madison, the home of the Lake Rescue Team. 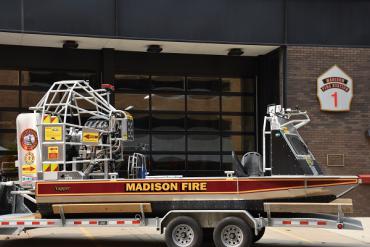