Continuing the City of Madison’s bimonthly tradition, this week we celebrated five outstanding City of Madison employees and five collaborative teams who live and breathe the City’s mission, vision and values at the 2022 July #TeamCity Awards Ceremony. These recipients that go above and beyond to help their department, other departments and residents were selected from a large pool of candidates that were nominated by their peers, supervisors, residents and everyone in between. This month’s celebration was the first in-person #TeamCity ceremony since the very first one launched in February 2020, taking place in the Madison Room at the Central Library location of the Madison Public Library.

I’m inspired by these nominations to learn about the range and quality of work that we all do as a unified City operation. It makes me grateful to work alongside all of them. You can read about the awardees and their great work below.

The #TeamCity Administration Award goes to Bonnie Chang. Bonnie is a Public Records Information Clerk in the Clerk’s Office. Bonnie plays a key role in every election, from planning and personnel, to logistics and transport, along with the rest of the team. As we all know, elections in Madison and Dane County have morphed in recent years due to the pandemic and increased scrutiny of every voting location and every vote. Safety practices, early voting and mail-in voting opportunities were greatly and successfully ramped up for the public, and new software systems are being implemented to make voting locations efficient. Beyond elections themselves, Bonnie is a leader and tireless advocate in administering mock elections for all ages, and many other voter outreach events. We depend on her and all Clerk’s Office staff to maintain the front lines of our democracy. Thank you for your leadership on behalf of the community, Bonnie. Bonnie was nominated by Taylor Wall from MPD. 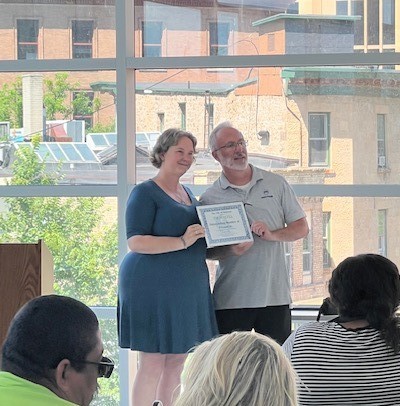 The #TeamCity Community Service & Support Award goes to Tim Purcell. Tim is a driver for Madison Metro. I’ll simply quote the email we received from a resident who was in a serious car accident near where Tim was driving:

Tim must have immediately notified 911 providing valuable facts about what he witnessed, and then left the bus to come to me. You can see in the video that no one else stopped to help. He introduced himself, said he was a Metro driver, told me he called 911, and told me briefly what happened. He also assured me he witnessed it and the bus caught it on camera. He was very calm, reassuring and professional. I cannot tell you what his presence meant to me.... He was so solid and professional that his demeanor allowed me to stay calm too.

We are SO glad that this resident is okay, and that Tim jumped into action during this serious event.

The #TeamCity Public Health & Safety Award goes to Lourdes Shanjani. Lourdes is a Bilingual Health Education Coordinator for Public Health Madison & Dane County. In this role, you’ll see her engaging with BIPOC organizations throughout Madison and Dane County, creating culturally competent communications content for PHMDC--which has become more important than ever before--and also translating materials into Spanish. In a COVID era where testing, vaccinations and masks were a matter of preserving health, mental health and life, she held dozens of community sessions where people could ask questions and learn more about the vaccines, 25% being in Spanish. She worked with partners to establish mobile vaccination clinics in places like La Rosita and Mercado Marimar, and she helped distribute masks and rapid tests through City and County libraries. No doubt, her work has helped save lives around the County and beyond. A skilled and effective communicator and educator, Lourdes was nominated by Data Communications Coordinator Rebecca LeBeau.

The #TeamCity Public Works & Land Use Award goes to Gabriela Arteaga. Gabriela is an Administrative Supervisor at Building Inspection. Her main responsibilities revolve around the work of a large team of inspectors who fan out through the City each day to ensure the structural integrity and code compliance of critical infrastructure. Beyond these important duties, on a voluntary basis, Gabriela plays a lead role in the City’s RESJI programs. She and the RESJI CORE team have stepped up during a challenging time for members of our workforce and larger community. They hosted many spaces for City employees to empathetically process events in the Madison area and throughout our nation. They screened and facilitated conversations around the film Race the Power of Illusion. Gabriela has also shown up with her own voice to encourage belonging and compassionate accountability while promoting racial justice. Leading RESJI while respectfully giving space to the many stakeholders involved is not easy, and we thank Gabriela for taking on this important work. She was nominated by Health Equity Coordinator & RESJI Tools and Training Co-lead Allison Dungan, and COVID-19 Response Specialist Ryan Jansen. 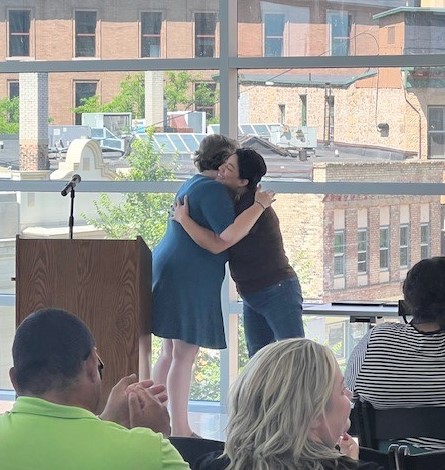 The #TeamCity Mayor’s Choice Award goes to Nancy Saiz. Nancy is a Community Development Specialist at the Community Development Division and has been with the City over for 10 years, with duties including planning for, collaboratively developing, administrating and evaluating community projects and programs that aim to improve quality of life and remove barriers to opportunity for Madison residents. She administers contract development and compliance, as well as creating request for proposals or request for bids processes. She is also bilingual in Spanish. This allows the Spanish-speaking community equitable access to new opportunities. She is the ultimate joiner, playing a key role in RESJI, the Multicultural Affairs Committee (MAC), serving as a MAC Peer Support Advisor, the Latinx Community Engagement Team (LCET) and the Neighborhood Resource Teams (NRTs). Nancy is all-around well-liked by all she comes into contact with and embodies what #TeamCity is all about. She was nominated by Child Care Scholarship Coordinator Rommel Tijerino.

The #TeamCity Team for Community Service & Support is Warner Park Community Recreation Center. Warner Park is one of the crown jewels of our park system, and at the center of that is Warner Park Community Recreation Center, a true success story. The Warner Park Community Recreation Center (WPCRC) reopened to the public on January 25, 2021, after closing for ten months to support the emergency men’s shelter. WPCRC staff did an exceptional job of quickly restoring the facility for public use in just one month. After reopening, the WPCRC was one of the only public facilities in the city offering in-person recreational opportunities, including fitness center workouts, open gyms, facility rentals and limited community programming at the time. WPCRC staff were instrumental in providing programs and services to teens that had been significantly impacted across the city by COVID-19, with the community’s focus on virtual support for students K-5. WPCRC staff provided 10 hours of daily open gyms for North/Eastside teens, hosted monthly Teen Nights and a five-week 3ON3 Basketball Tournament Series. Additionally, the WPCRC formed a new partnership with the Madison Mavericks semi-pro basketball team and hosted five home games for the inaugural OBA League, becoming one of the first facilities in the city to host live sporting events. WPCRC staff experienced multiple iterations of the Forward Dane order and mask mandates and are well versed in operating a public facility during extraordinary times. All involved staff, nominated by outgoing Facility Manager Terrence Thompson, are proud to play a role in keeping the community active, healthy and safe during the pandemic and ever since.

The #TeamCity Team for Public Health & Safety is the MPD COVID Medical Team. In March 2020, the Madison Police Department launched the COVID Medical Team to address the pandemic and reduce the exposure of employees, especially those out in the field. The team started as a three-person unit, available 24/7 to assess and address employee exposure while in the community. The team eventually morphed into a larger, more robust group that was able to address the challenges arising from COVID-19 while fulfilling the mission of keeping Madison safe. This included effective and quick testing and other safety protocols unique to law enforcement. The team had to be adaptable under pressure, with the roles of many of the police officers changing. Guidelines and knowledge were constantly being updated and processed for implementation on the go. We are proud of the team for keeping MPD running throughout the pandemic, and getting the entire workforce through this difficult time. The team was nominated by Police Officer Charles Pratt. 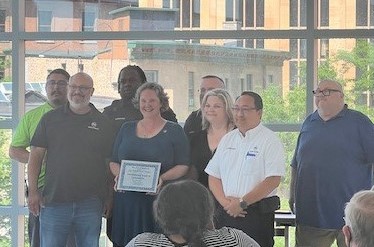 The #TeamCity Team for Public Works & Land Use is Metro Transit Supervisor Group. What does it take to run Madison’s bus system, one of the core arteries of a great city? I’ll tell you: it’s the stellar group of supervision for daily Metro on-street operations from 4am until 12:30am, 7 days per week, 365 days per year supervising the drivers, mechanics and administrators who have gotten the job done throughout the challenges faced by mass transit. Core functions include driver scheduling and booking, paratransit scheduling, radio dispatching, road supervision, emergency response and support, accident investigation, customer feedback investigation and conflict resolution both internal and external. All of them are essential employees that have worked day in and day out while coordinating successfully with each other for safe, reliable and courteous transit for our community and also neighboring communities. As a bus rider, I applaud their efforts. And here’s an important plug: all City employees are entitled to free, unlimited passes--if you don’t have one, what are you waiting for? This outstanding team was nominated by Operations General Supervisor Phil Gadke.

The #TeamCity Team Receiving the Mayor’s Award is the June 13, 2022 Storm Response. Large chunks of hail and gale force winds seemingly coming out of nowhere in June in the middle of a sunny and pretty clear day? Welcome to the June 13, 2022 storm in Madison. This unprecedented event wrought havoc around town, including significant tree damage across different parts. Streets Operators and Urban Forestry answered the call--make that nearly 800 emergency calls. They worked hundreds of hours, days nights and weekends cutting, collecting and grinding over 4 million pounds of brush and counting. They jumped into action with chainsaws to clear downed trees, pruning branches from aerial towers and operating various equipment to haul, collect and process brush created by the storm. Meanwhile, Fleet mechanics worked many overtime hours to keep all that critical equipment in working order for the front lines. While we took a hit from the storm, it was no match for the City storm response. The team was nominated by Bryan Johnson, and seconded by Fleet Superintendent Mahanth S. Joishy.

Congratulations to all of this month’s recipients for recognition of all of the work they do! Madison is a great place to live and work thanks to people like them.

This content is free for use with credit to the City of Madison - Mayor's Office and a link back to the original post.
Tags: #TeamCity