Learning from the Past

Back in 1918, Wisconsin was struck by a devastating respiratory illness about six weeks before the end of World War I. Like today, a virus was being spread simply by the droplets emerging from people’s mouths when they coughed or sneezed. This invisible killer – known as the ‘Great Influenza’ - was spread by soldiers traveling in crowded ships holds returning from the WWI to locations around the world. The pandemic would eventually kill more people than WWI did—some 50 to 100 million people worldwide.

It is strange but true that more than 100 years later we are using many of the same techniques to fight the virus that public health officials used in 1918.

Back then, Wisconsin’s State Health Officer Dr. Cornelius A. Harper, a Madison physician appointed by Governor Robert M. La Follette, was tracking news reports of thousands dying in Boston and other East Coast cities. He began to prepare with educational campaigns, asking the public to wash their hands, cover their coughs, stay home if they were sick and to avoid crowds.

But when those measures fell short, in October 1918 he proactively issued a statewide advisory, ordering all boards of health "to immediately close all schools, theaters, moving picture houses, other places of amusement and public gatherings for an indefinite period of time." When Wausau dragged its feet on closing schools, he threatened to quarantine the city. The disease took longer to get to rural areas, but it did eventually to devastating effect.

Historians report that Wisconsin was the only state to issue a state-wide order. Over 8,459 people would lose their lives, but at the end of the day, the state emerged with one of the lowest death rates in the nation.

Unfortunately, the lessons of 1918 were not well learned in the United States. When COVID-19 hit our shores just a few months ago, we were still not prepared for a fast moving, extremely dangerous respiratory virus. Because the disease spreads easily and because you can be infected and spread the virus before you have symptoms, preventing transmission is difficult.

The federal government’s failure to invest in pandemic planning and public health infrastructure has left us without the infrastructure and supplies we need to effectively combat this disease. We lack the testing capacity we need to find the disease, the contact tracing and isolation facilities we need to isolate those who tested positive, and sufficient protective gear (PPE) we need to protect health care workers in hospitals and clinics. Without enough of these tools in place at the beginning of the pandemic, Governor Evers and his top health officer, Department of Health Services Secretary Andrea Palm, had to resort to physical separation - shutting schools, libraries, restaurants and urging everyone to stay at home to prevent transmission and protect those most vulnerable to the disease.

Preventing transmission is critical because without a specific treatment or vaccine, there is a real danger of our hospitals being overwhelmed with cases, especially the most severe cases that require ventilators. All the public health orders – from the State and from Public Health Madison & Dane County – are designed to reduce the number of cases in the health care system by reducing the number of people exposed to the virus.

That is why so many things are closed – to prevent people with the virus coming in contact with others. That is why we emphasize washing your hands and covering your coughs, cleaning surfaces and wearing face coverings – these are all things that help prevent transmission, and thus prevent more cases. This is what we mean when we talk about flattening the curve – the more people infected per day, the steeper the curve. 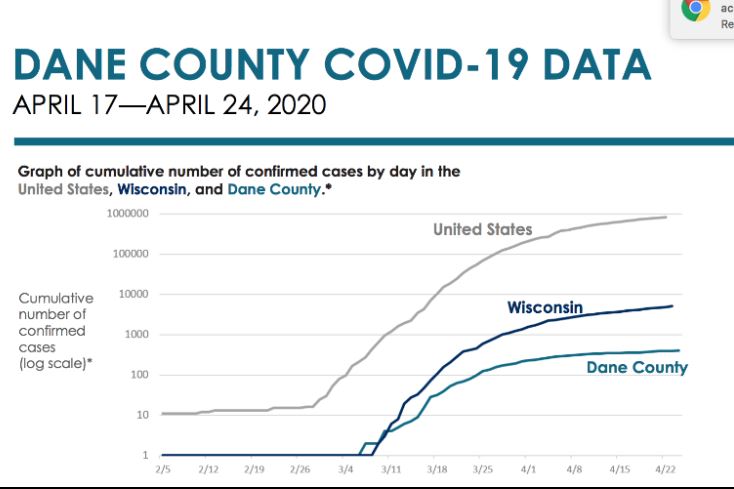 The “Safer at Home” order is showing significant success in flattening the curve and keeping us safe. When the order was issued, the state reports the number of Wisconsin residents testing positive for COVID-19 was doubling every 3.4 days; as of April 14, the rate of doubling had slowed to approximately 12 days. In Dane County the doubling time went from five days to 17. Thanks to Governor Evers’ early action we have avoided overwhelming the health care system so far.

Today Wisconsin DHS is reporting 5,911 people with confirmed COVID-19 in Wisconsin. Sadly, 272 people have died. Here in Dane County, we had 414 cases, 21 deaths. It is worth remembering that until we get a vaccine (projected to be a year to 18 months from now), we are still in the early days of this pandemic. As we dial back physical distancing, we will have to do it in such a way that new waves of illness won’t overwhelm our health care partners.

“We are in the second inning of a nine-inning game,” says Dr. Michael Osterholm of the Center for Disease Research and Policy at the University of Minnesota, so every step to open up businesses and return to a more normal life will have to be taken carefully with data as our guide. That is why we are working to ramp up testing, increase our ability to do contact tracing, secure more PPE, and more.

In the next few days I’ll be blogging more about the data we’re using to track the progress of our efforts, and how we’re getting ready to reopen more of our community when the data show it’s safe. Stay tuned, and follow Public Health Madison & Dane County on Twitter and Facebook. Stay well!

This content is free for use with credit to the City of Madison - Mayor's Office and a link back to the original post.
Tags: COVID-19