Madison has had a sister city relationship with Kanifing, the largest municipality in The Gambia, since 2016. Kanifing is one of Madison’s ten sister cities. Madison has had the pleasure of hosting visitors from Kanifing, also known as Kanifing Municipal Council or KMC, several times. While visitors from Madison have been to KMC, we have never sent an official delegation – until now. 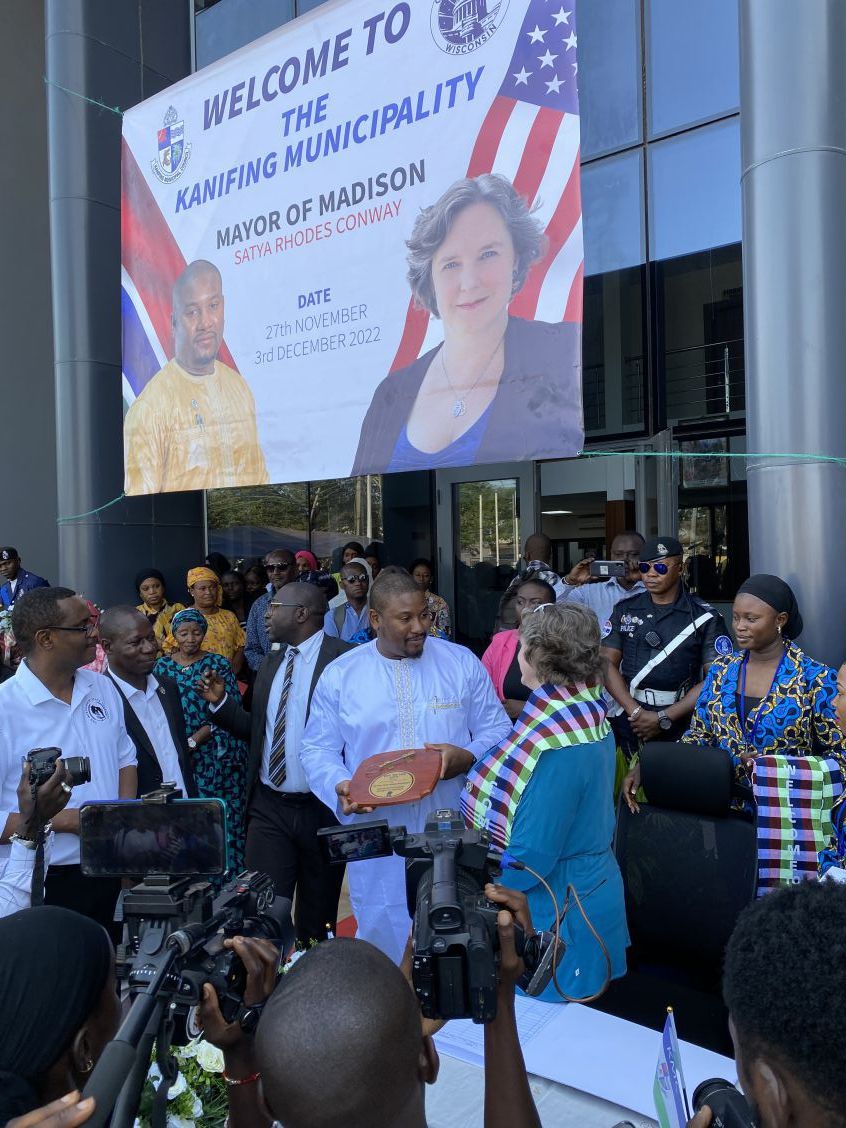 From November 27 to December 3, a delegation from the City of Madison traveled to Kanifing to strengthen ties and deepen collaborative efforts. Delegates included Mayor Satya Rhodes-Conway, Deputy Mayor Linda Vakunta, Alders Barbara Harrington-McKinney and Charles Maydze, Library director Greg Mickells, Department of Civil Rights Director Norm Davis, Office of Business Resource manager Saran Ouk, State Representative Samba Baldeh and leaders in the Madison community, including representatives from Dane County, Madison College, local nonprofits, and businesses. The Office of State Representative Samba Baldeh, the Madison-Kanifing Sister City group, the Mayor’s office and partners in The Gambia, including Kanifing Municipal Council, Banjul City Council, the Ministry of Higher Education, and the University of The Gambia, coordinated the trip. Each delegate paid their own way. All planned activities aimed to deepen connections between policy makers, elected officials and staff working on issues of shared concern to both Madison and the Kanifing Municipality.
Mayor Talib Bensouda of Kanifing welcomed the delegation with a guard of honor ceremony and presented Mayor Rhodes-Conway with a key to the city. A Council meeting followed where Kanifing municipal officials and Madison delegates shared about their areas of work within their respective cities. During this council meeting, Mayor Bensouda highlighted three areas in his municipalities that has seen great improvement because of the Sister-City partnership with Madison. These include management of Kanifing’s dumpsite, developing a citywide waste management/collection system and building a main library for the municipality. During his speech, the mayor stated: “I think libraries are so important. We have a youthful population. Over 65% Gambians are below the age of 35 and we do not have one single public library. But through the inspiration of Madison library, I am glad to say we have funding and we are actually going to build a library and it will not only be the first library in the Kanifing Municipality, but it will also be the biggest library in our country and it is all inspired by Madison city.”
He further relayed that the inspiration to fence the municipality’s dumpsite, at Bakoteh, came from his visit to Madison. Additionally, for the first time in the history of his municipality every household will be receiving garbage bins. This effort began with his interaction with the City of Madison. 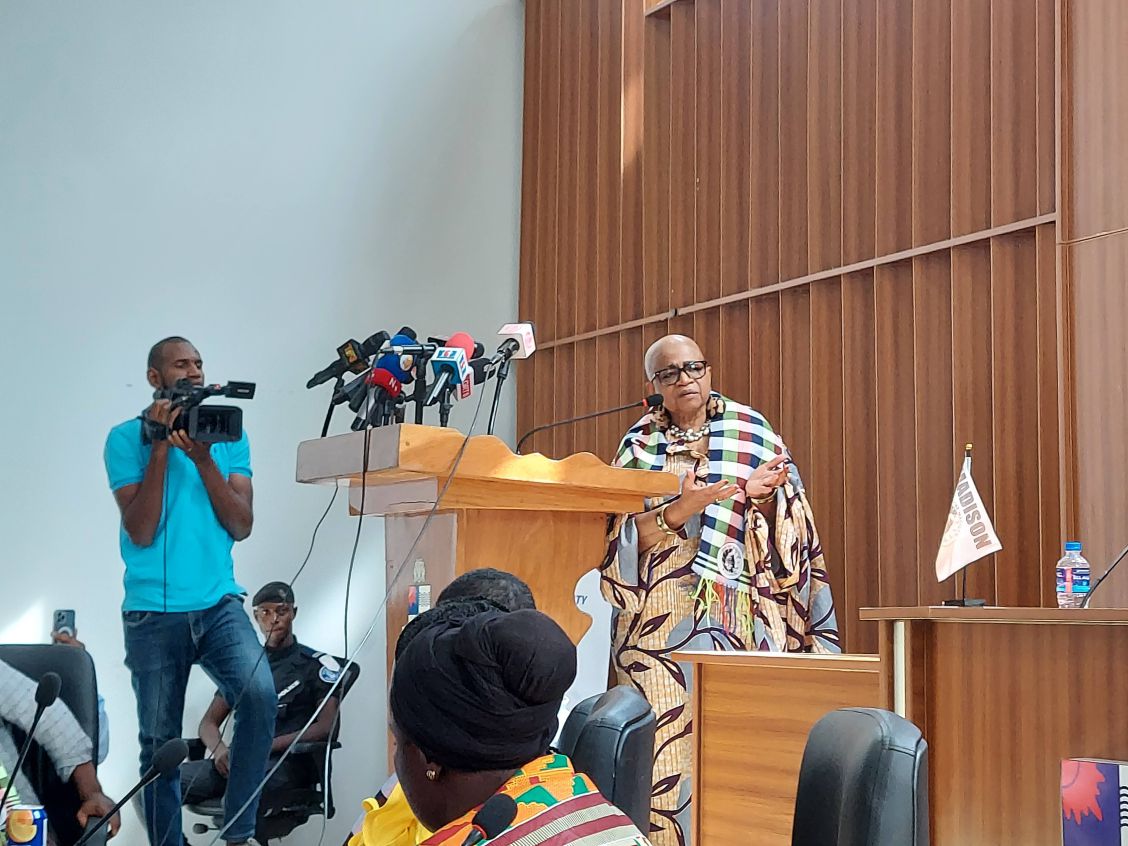 Reflecting on the visit, Mayor Rhodes-Conway highlighted some common concerns and issues both communities are working on and could learn from each other. These included housing, climate change and its impact, education and economic development. “We share an interest in supporting entrepreneurs and having places where small businesses can sell their goods or practice their businesses and we share a challenge where both Kanifing and Madison are rapidly growing municipalities and that has challenged us with housing issues and the need to produce more housing and housing that people can afford to live in. This is the singular problem in Madison, it is our biggest challenge and I hear from the mayor that it is a big challenge here as well. I am hoping that we can discuss these shared concerns and learn from each other. I hope we can further deepen bonds, friendship, and communication between Madison and Kanifing.”
This was the first sister city visit for the Mayor and Alders Barbara Harrington-McKinney and Charles Maydze. Alder Harrington-McKinney wrote, “There are few times that one gets the opportunity to grow in humbleness. The trip to the Gambia West Africa was one that made me humble, grateful and more committed than ever to leave each space I enter a bit better. Rep. Samba Baldeh thank you and your organizing team for making the trip possible. Every detail of the trip was immaculately planned. The people of Gambia stole my heart. My visit to the Gorée Island broke my heart as I stood in THE DOOR OF NO RETURN, where tens of thousands of black bodies once free and proud; boarded ships as slaves. I learned of the tens of thousands of bodies tossed into the sea because they were too sick to be sold in the slave markets.” 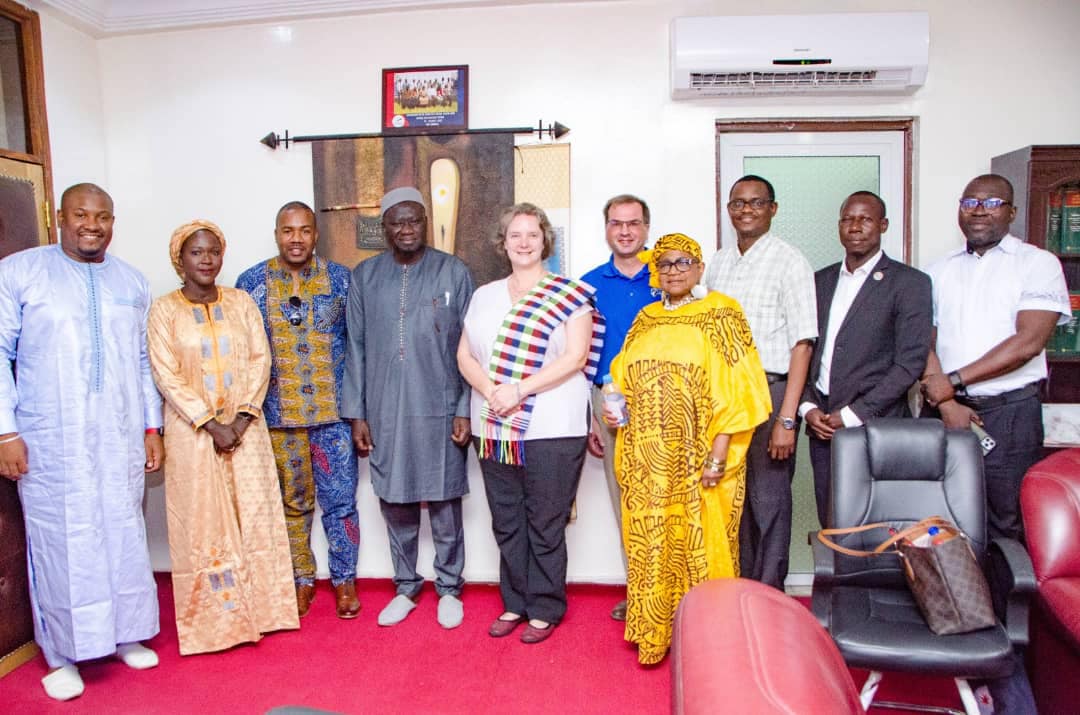 Reflecting on the visit, Alder Maydze highlighted, “One of my greatest takeaways from this trip was Gorée Island. A place in Senegal where Africans went from Freedom to Slavery. While in captivity on the island and during the journey toward slavery, 6 million Africans lost their lives. A lot of people don’t know this history.” On the collaboration with Kanifing Municipality, the alder noted his observations on potential areas of collaboration, “While the sister city has an array of interest areas, three things stood up to me during the trip — waste management, education and the challenges women face in gardening. I hope we can find ways to work with our sister city and their communities to help address these challenges.”
Other City of Madison delegate members reflect on the significance of the visit, identifying areas they are excited to work on with the Madison-Kanifing Sister City group. 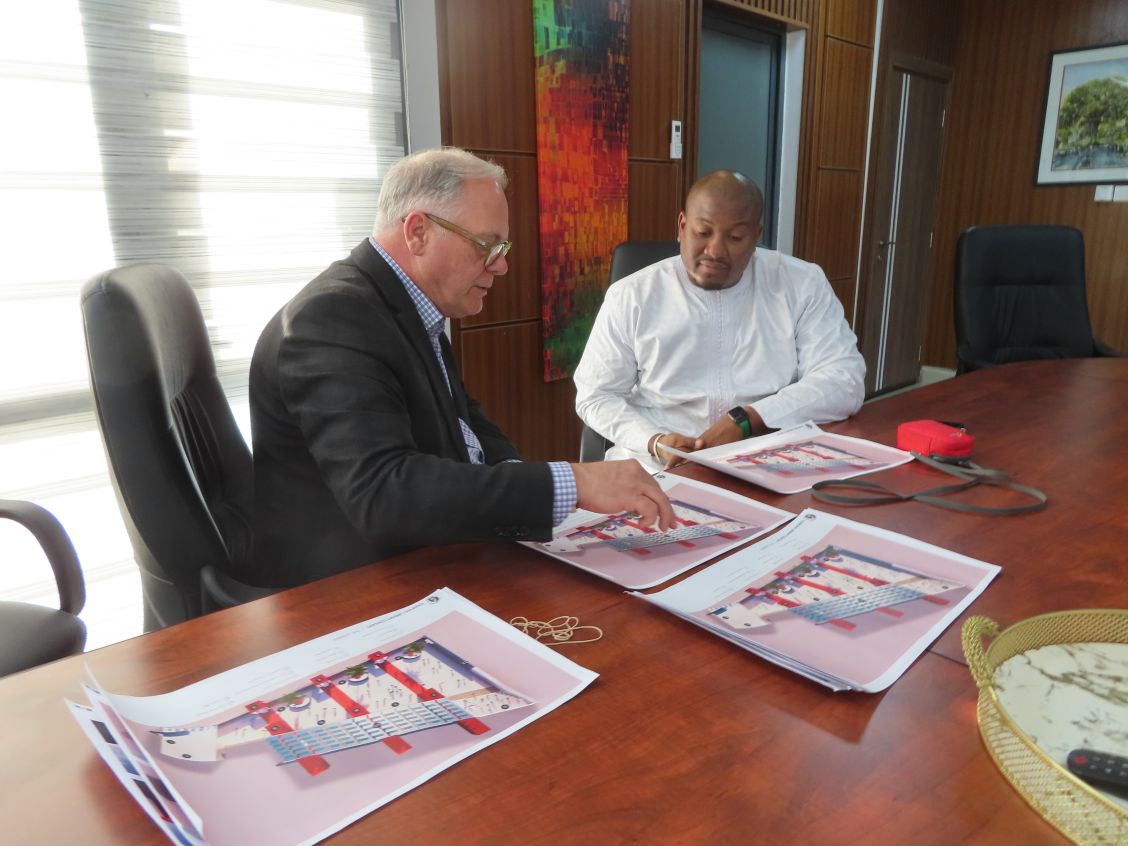 Library Director, Greg Mickells, who has previously engaged with Mayor Bensouda and KMC on their main municipal library project, spent significant time with the mayor going over some ideas he and the Madison Kanifing Sister City coalition had previously worked on regarding a possible interim solution as they built their main library. Director Mickells plans to continue offering support to the KMC main library development as needed. Reflecting on the trip to the Gambia, he notes, “At the marina I ran across a handmade sign by the fishermen welcoming Mayor Satya and Mayor Bensouda. Beneath the mayors’ names was the message “Keep the Good”. There are many takeaways from our visit and how it can help inform our work here in Madison. The one that stands out for me was the Gambian focus on making something happen, and not always getting stalled by the long term goals. Many times when I saw the progress being made in Kanifing it seemed like very small steps, but they were intentional and positive steps, and then you realize the importance of “Keep the Good.”
Department of Civil Rights director, Norm Davis notes he took special interest in two areas: infrastructure development for individuals of all abilities and contracting opportunities for local, diverse businesses. Looking forward he said, “I was able to establish contacts in both of these areas; one Kanifing Municipality Counsellor leading work to support those that are differently-abled and one member of the Gambian Parliament, chairing a committee on Human Rights. I’m excited to learn more about ongoing programming efforts for this work and engage these officials in sharing ideas of how to prioritize and expand inclusion.” 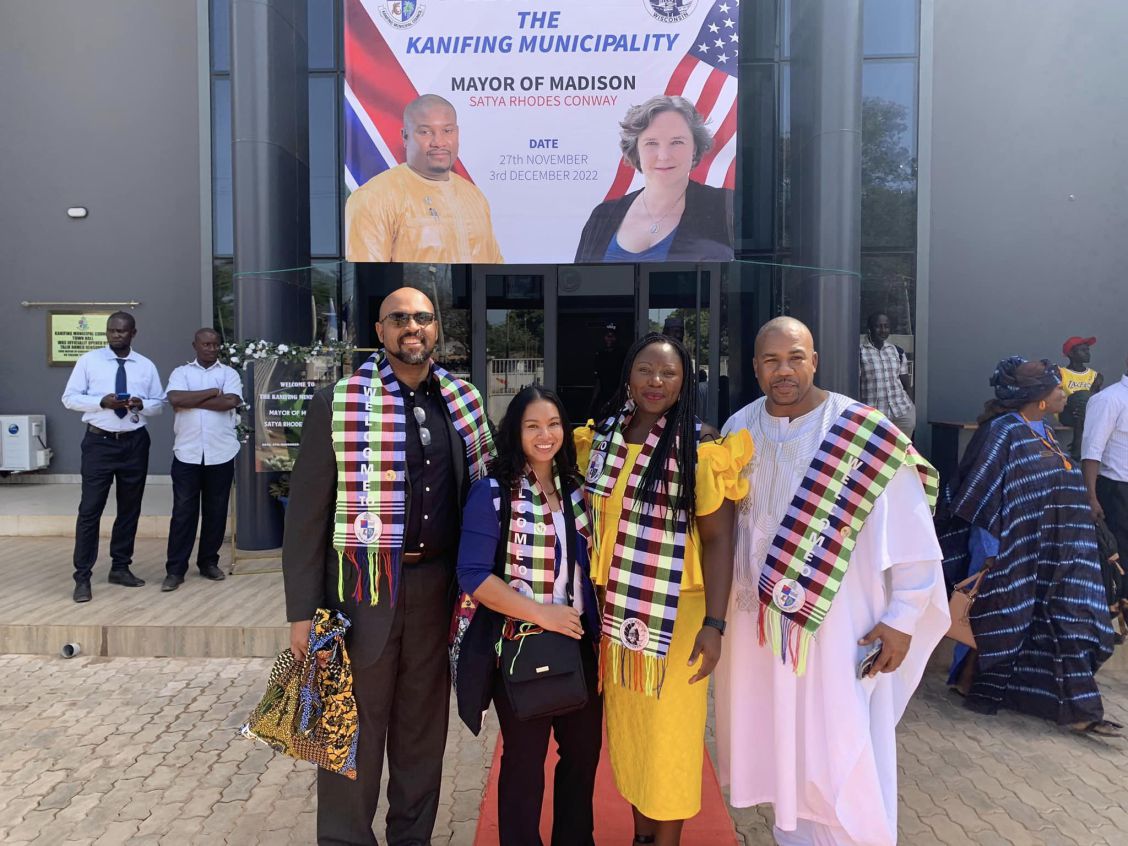 Several delegates identified opportunities for economic development. Office of Business Resources manager Saran Ouk is most excited to work with the Madison-Kanifing Sister City group on issues of small business development. While in country, she had the opportunity to speak with KMC Deputy Mayor Binta Janneh Jallow. She notes the Deputy Mayor is excited to learn more about Madison’s Farmer’s Market, pop-up shops, street vending and agriculture. On what Madison could learn from our sister city, Saran noted, “What we can learn from our counterparts in Kanifing, or be reminded of, is that it takes a village. It truly takes the entire community to support people in our city and build the economy. I have personally been reminded to stay humble, appreciate what I have and help others whenever I can.”
Deputy Mayor Linda Vakunta left with great admiration of the resiliency of the Gambian people to build communities and a nation rooted in strong democratic principles. She notes throughout their time many leaders including Mayor Bensouda, the president of The Gambia, Adama Barrow and others talked about building a democratic nation after 21 years of dictatorship under the previous president. Additionally, Deputy Mayor Vakunta had several conversations with women leaders who are changing the narrative around female leadership in the country. She looks forward to continuing conversations and engagement with our Sister City counterparts as we work to strengthen women’s leadership here in Madison and in the Gambia.
During the visit, delegates witnessed a Memorandum of Understanding signing between Madison College and the University of The Gambia; visited a Women’s Garden, a fish market and a school; and met with several national government ministers and the US Embassy. The delegation plans to meet in Madison in the new year to follow up on ideas for continued and future collaboration with our friends in Kanifing.
This content is free for use with credit to the City of Madison - Mayor's Office and a link back to the original post.
Tags: Sister cities, Gambia, Kanifing