Madison native Karlin Younger received  some national attention recently for her quick work in finding and reporting a pipe bomb near the Republican National Committee offices in Washington D.C.  Karlin is a proud former City employee and I wanted to honor her with this Mayoral Proclamation and recognize her as an Honorary #TeamCity Award Winner. 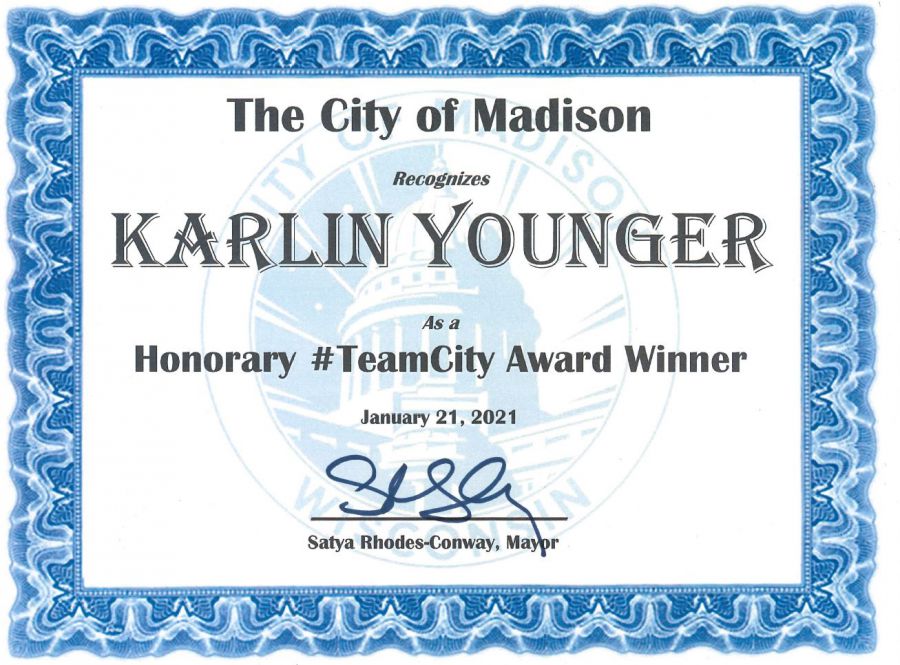 WHEREAS, Karlin Younger, grew up in Madison’s Bay Creek neighborhood and graduated from West High School in 2002. After earning her undergrad degree at UW Madison in International Relations, she worked in China, studied at Oxford and worked in London before returning to the United States and eventually settling in Washington D.C. to work for the U.S. Department of Commerce, and

WHEREAS, Ms. Younger is particularly proud of her ties to her hometown of Madison and, in fact, was employed by the City of Madison Public Library for six years as a page who kept our libraries organized and efficient, and

WHEREAS, Ms. Younger reports that, thanks to the people and the old pneumatic request tubes, working in the Lower Stacks of Madison’s Central Library was probably the coolest jobs she’s ever had, an

WHEREAS, On Wednesday, January 6th Ms. Younger was working remotely on the Dept. of Commerce’s FirstNet project, a communications network dedicated to first responders from her apartment a few of blocks from the U.S. Capitol; and

WHEREAS, At lunchtime, Ms. Younger decided to check on her laundry, which required her to walk to the back of her building adjacent to the Republican National Committee (RNC) building, and

WHEREAS, Because she is very observant, she saw what she initially thought was recycling but with a closer look discovered what appeared to be a pipe bomb apparently set to explode in twenty minutes, and

WHEREAS, She immediately reported the device to a guard at the RNC and local law enforcement who evacuated the block and disarmed the device with a water cannon and quickly discovered another device near the Democratic National Committee headquarters, and

WHEREAS, January 6th will live in infamy as a day in which an armed mobbed overran the U.S. Capitol and Ms. Younger’s swift action prevented further injuries and deaths on that terrible day, and

NOW, THEREFORE BE IT RESOLVED, That I, Mayor Satya Rhodes-Conway, thank Karlin Younger for her quick work and calm head, which resulted in the preservation of life and safety; and

NOW, THEREFORE BE IT FINALLY RESOLVED, and that Karlin Younger is an honorary permanent member of TeamCity.


This content is free for use with credit to the City of Madison - Mayor's Office and a link back to the original post.
Tags: Honorary #TeamCity