MetroForward>> a Rapid Transit Plan to Decrease Congestion, Combat Climate Change and Build the Backbone for a Vibrant Economy 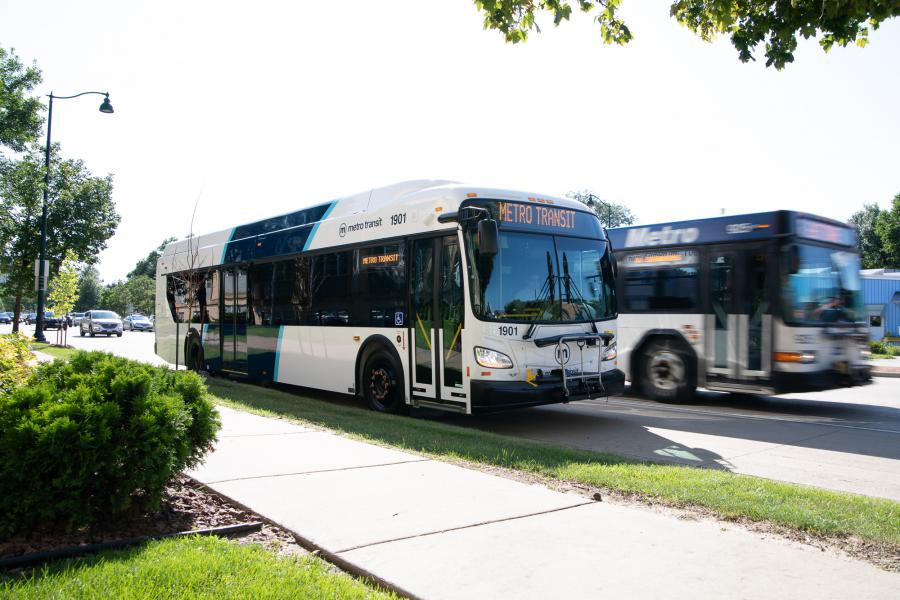 This week, I unveiled my rapid transit plan called MetroForward>> a major investment in transit which will speed workforce transportation, reduce congestion and drive times, and build the transportation backbone of a vibrant regional economy.

The Madison region is growing rapidly. This growth is evident in many ways, from the booming housing development, to the changing downtown skyline. It is also evident in increased traffic congestion.

Madison needs to get ahead of the problems associated with rapid growth and avoid the issues faced by other similarly-situated cities. In Texas, for example, Austin’s inability to create rapid transit options during its rapid growth period has led to such gridlock, the City ranks as one of the most congested in America -- harming its quality of life and its economy.

Dane County is at a pivot point. By the year 2050, there will be an additional 85,000 new jobs, 100,000 new residents and an additional 800,000 road trips. Congestion is predicted to double. We can’t have a superhighway through the Isthmus. We need to get ahead of this growth now and build a modern rapid transit infrastructure that lifts our growing economy and does not slow it down.

If cars made up all of these additional 800,000 road trips, it would require adding two or more lanes to the main roads on the Isthmus, and doubling parking in the downtown area, according to the City’s Department of Transportation.

We could pursue the path of expanding our major roads and building 10,000 new parking spots on the Isthmus, but the cost to taxpayers would be staggering, hundreds of millions for road expansions -- $250 million for the parking alone. Rapid transit is simply the best option to connect people with jobs on the Isthmus and in the larger Dane County region.

Many community leaders came to our press conference unveiling MetroForward>>. Here are some of the things they had to say.

“A rapidly growing community with a vibrant economy needs a state-of-the-art transportation system,” County Executive Joe Parisi said. “Dane County offers a quality of life that’s highly attractive to prospective employers and those seeking work, and bus rapid transit is an important advancement so we maintain our competitive edge.”

Rapid transit connects people to jobs in a more equitable and reliable manner, providing access without the high costs of car ownership or parking. The yearly cost of a Metro pass is one-tenth the cost of owning a car.

“My hope is that rapid transit will also help address inequities in our community. Currently, a large percentage of people of color and low-income individuals experience travel times of more than 45 minutes. People of color transfer over three times more often than white riders. Faster service, more routes, and expanded access to bus passes are some of the important pluses of MetroForward>>,” said Vanessa McDowell, CEO of YWCA Madison. 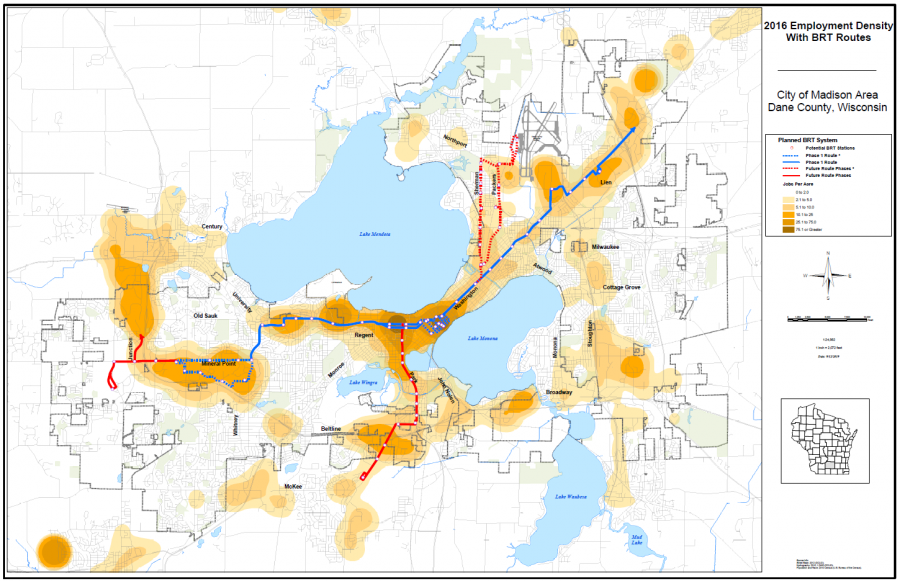 For many a rapid transit system is critical to our continued economic development. "The Chamber has endorsed Bus Rapid Transit in our two most recent advocacy agendas as a vital investment in supporting our growing economy. This will help connect more people with jobs, increase weekend and evening service, transport young people and college students to school and significantly reduce ride times," said Zach Brandon, President of the Greater Madison Chamber of Commerce.

Climate change is upon us and the City is doing many things to address the related challenges, including major investments in storm water management, clean electric City vehicles and setting a goal for carbon neutral operations by 2030. MetroForward>> is an important part of this commitment.

“Transit is a big part of the solution to our climate crisis, and it has the opportunity to radically improve the lives of the people in our city and county. It is the climate-friendly connector between people and the places they want and need to go,” said Cassie Steiner, Campaign Coordinator for the Sierra Club, John Muir Chapter. “Ultimately MetroForward>> will take 2.6 million car trips off our streets every year.”

The benefits of rapid transit are numerous and grow over time:

It is the most efficient way to connect people with jobs. On East Washington, inbound buses make up less than 1 percent of the traffic capacity yet carry 11 percent of the people.

Enhancing Metro service on weekends and evenings allows 2nd and 3rd shift workers to more easily get to work, and allows families to run the weekend errands they need.​

Bus rapid transit is the most feasible and reasonable solution to address regional congestion challenges. Metro currently provides 13 million rides per year. Other solutions, such as rail or continued auto dependence, are 2 to 7 times more expensive.

Bus rapid transit will provide fast, frequent, reliable service that is not impacted by congestion. The planned transit project will reduce transit travel times by up to 25 percent.

HOW WILL WE GET THERE?

Lack of access to transportation disproportionately impacts people of color, seniors, young people, the differently-abled, and low- to middle-income families who are unable to reach school, work, or the doctor’s office without access to a car. Restricted access limits upward mobility and shared prosperity. MetroForward>> addresses these inequities by subsidizing additional passes for riders and families in need; providing free summer youth passes for eligible middle and high school students to get to jobs and extracurricular activities; enhancing weekend and evening service for workers and families; and adding new routes to south-side educational institutions and surrounding communities.

Metro Transit’s main facility at East Washington Avenue is too small for our current fleet of buses and in serious need of repairs and safety upgrades. Parts of the facility were built more than 100 years ago and the building only has capacity to store 160 buses. With the $40 million renovation of this building over two years and the addition of a satellite facility, Metro Transit will be able to field 218 buses and build capacity for the future of rapid transit, along with new electric charging stations and maintenance bays.

Climate change is an urgent reality. In response, the City has set a municipal goal of using 100 percent renewable energy sources and becoming carbon neutral by the year 2030. Metro Transit accounts for a significant portion of all the carbon City vehicles emit. To clean our air and protect our planet, Metro plans to pilot the use of all-electric buses by 2020, with anticipated full fleet conversion beginning in 2023.

To expand service and reduce travel times for Metro riders by up to 25 percent, rapid transit uses dedicated lanes, modern platforms, pre-paid ticketing stations, larger buses and other improvements. Similar to light rail, but without the added expense of building rail infrastructure, these improvements allow for a very high-level of service. Rapid transit will complement Metro’s current service with riders able to hop on a rapid transit line every 15 minutes. More than 80,000 residents and almost 120,000 jobs lie within a 10-minute walk of the proposed BRT routes.

HOW WILL WE PAY FOR IT?

MetroForward>> capital costs are expected to be $200 million or more, with about half of the costs covered by federal grants. Two-thirds of the MetroForward>> costs are focused on BRT, with the remaining one-third covering other critical facility needs. Madison is pursuing many funding sources for the project’s local share, including other federal and state grants, local partnerships, and internal funding sources.

In fall of 2019, the City of Madison will be formally requesting entry into the federal Small Starts “project development” phase. This is a requirement of the Federal Transit Administration (FTA) to continue planning for BRT, and is an important first step, working toward a federal transit grant to build Phase 1 of the system. 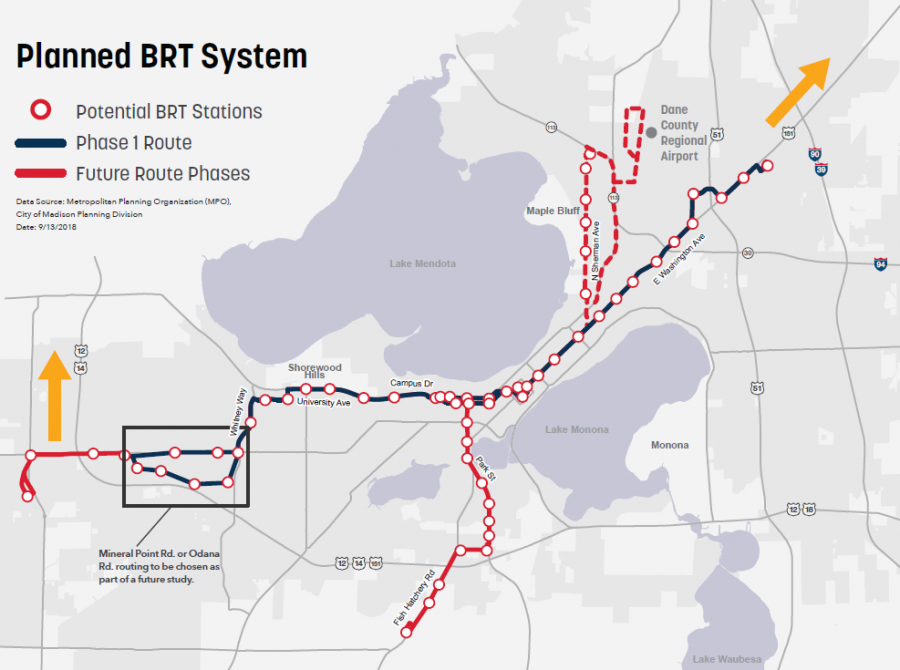 This content is free for use with credit to the City of Madison - Mayor's Office and a link back to the original post.
Category: Transit, Sustainability
Tags: Metro Transit, BRT