Thank you for Supporting Our Elections! A Message from Mayor Rhodes- Conway

The polls for our spring elections closed at 8:00 pm on Tuesday, April 7, and we now all wait to hear the results of our votes on April 13, the date by which all absentee ballots must be received (they also must be postmarked by April 7). While we don’t yet know the full results, we have some preliminary data to share about how many people voted.

On Tuesday, poll workers counted 87,552 ballots including 61,279 absentee ballots that had been returned. This election saw a record number of absentee voter requests: the City Clerk’s Office received and processed 87,323 absentee ballot requests. As you can see in the attached photo, drivers waited in long lines to deposit their ballot in the Book Drops of three local libraries. With 61,279 already counted and another few thousand returned and ready to count, we were still awaiting around 22,000 ballots on Tuesday evening that we hope to see postmarked by April 7 and arriving in the mail. 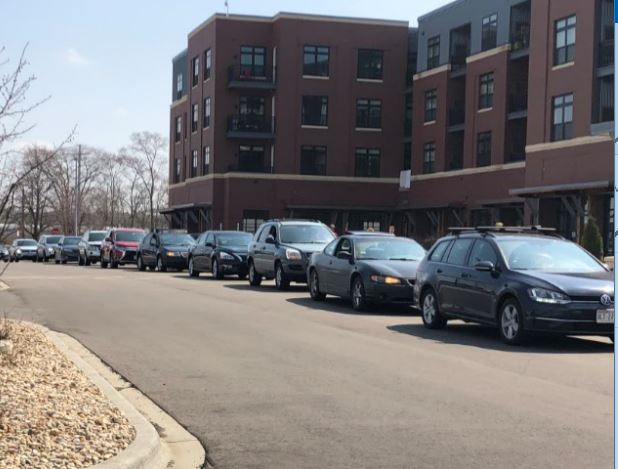 Voter turnout on Tuesday – the total number of votes submitted and counted on Tuesday as compared to the total number of registered voters – was 50.3%. That’s lower than the presidential primary in 2016 when voter turnout was around 66%. Those two numbers are not directly comparable because in 2016, all votes had to be in on Election Day. This year, absentee votes are accepted if postmarked by Election Day. That means we still have room for our voter turnout rate to grow, and I am hopeful that it will.

Our elections are critical to our democracy, and managing them in the middle of a pandemic is no simple task. This year, the City Clerk’s Office, with help from other departments and volunteers, processed requests for absentee ballots at ten times the numbers we had planned for. We faced cancellations from dozens of polling locations and from 1,400 poll workers – and understandably so, given the Safer at Home order. Nonetheless, hundreds of people stepped forward to work at the polls, as we implemented entirely new safety procedures and social distancing protocols, including the new and very popular curbside early voting.

Yesterday, in extraordinary circumstances, City staff, hundreds of volunteers, and tens of thousands of voters helped the City fulfill the critically important function of our elections. With all of your help, the City was able to stand up 66 polling locations which helped tens of thousands of people to vote without large crowds and with social distancing and safety measures in place. I am very grateful for your support. Thank you.

This content is free for use with credit to the City of Madison - Mayor's Office and a link back to the original post.
Tags: COVID-19, voting