Last week, after extensive outreach to residents, the City’s Community Development Authority (CDA) is sharing an ambitious vision to fully redevelop housing for low-income residents and add many more units on a major piece of “the Triangle” Downtown.

The CDA owns and operates all of the public housing units at the Triangle. These were products of the urban renewal era of the 1960s and 1970s, and while the housing has been well-maintained over the years, the units and buildings are approaching the ends of their useful lives.  The CDA’s draft plan was shared with the CDA Board last week. The draft proposal would demolish five dated and worn residential buildings and a grocery store and replace them with new buildings that would not only replace the 340 existing housing units, but add up to 860 new units too. With a likely count of around 1,200 units, we can add more affordable housing at a variety of income thresholds. The Triangle is big enough - over 10 acres - to accommodate the growth, and the proposal is consistent with the City’s adopted Triangle Monona Bay Neighborhood Plan (2019), which set an estimated upper bound of roughly 1,600 units at the site. 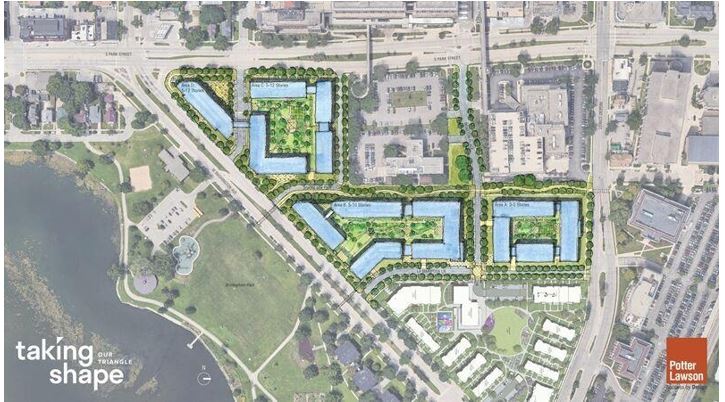 The plan for the Triangle is still being developed and nothing is final yet. The engagement and planning phases of the project, called “Taking Shape, Our Triangle,” will likely continue through 2023. At its earliest, construction could begin as soon as late 2024, and work will occur in phases over many years. The CDA has been clear that everyone living on the Triangle today will have a home there post-redevelopment if they wish with no change to their rent structure. The “Taking Shape” development partnership team, led by Madison-based and women-owned development firm New Year Investments with assistance from Potter Lawson Architects and engagement specialists EQT By Design, is focusing its resident engagement around themes of building connection and community, promoting well-being, and ensuring functional and sustainable operations. The team is also exploring ways to make the Triangle redevelopment more livable and human-scale for current and future residents, and is looking at how the Triangle could move the City closer to its 100% renewable energy goals by exploring green energy technologies like geothermal.

In the current planning, the concept of a central community hub near the middle of the site is a major focus. Public and semi-private outdoor spaces feature prominently, and better pedestrian connections between buildings will improve circulation for mobility-impaired residents. Housing unit designs will also be aimed toward greater comfort and accessibility for all, including open floor plans and improved access to natural light and lake views.

The CDA is also focused on better integrating the Triangle community with the surrounding urban fabric through the site layout and street network. The neighboring Bayview Foundation is already working on a $52 million redevelopment of its housing, and and CDA is in close communication with Bayview’s leadership on a shared vision that both projects will blend together seamlessly as a single neighborhood.

This content is free for use with credit to the City of Madison - Mayor's Office and a link back to the original post.
Category: Affordable Housing, Sustainability
Tags: Bayview Foundation, Community Development Authority