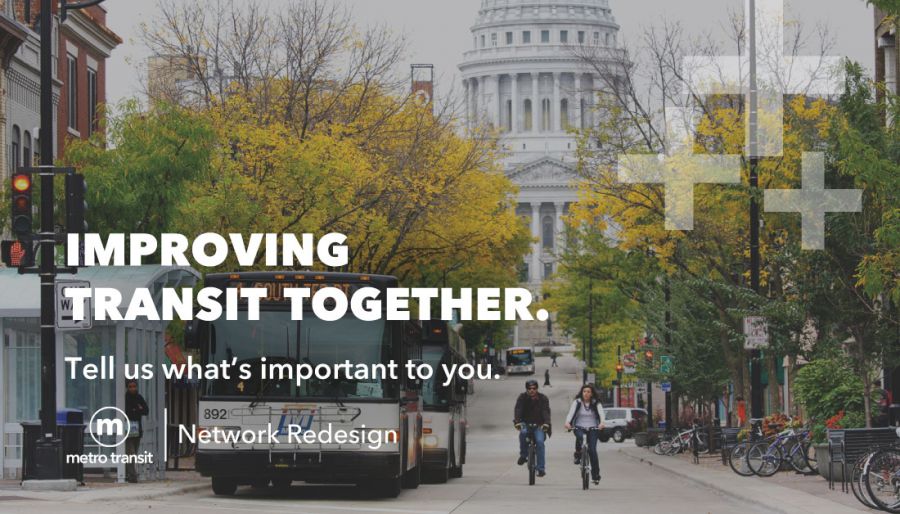 What is the Transit Network Redesign?

The Transit Network Redesign will reconfigure all of Madison’s bus routes to better serve its residents and businesses with faster, more frequent service that is simpler and easier to use.

Why does the transit system need a redesign?

Although Metro Transit has served the Madison area well for over 50 years, the existing network of routes is indirect, confusing, and infrequent. Before COVID-19, service was overly oriented towards peak periods with not enough service during middays, evenings, and weekends.

When BRT is implemented in 2024, the existing route structure will need to be changed so that it doesn't duplicate BRT routes, but instead complements it and provides connections between the BRT network and neighborhoods not directly served by it.

Why is more frequent service important?

Riding the bus involves waiting for your bus, walking to and from the bus stop, riding the bus, and potentially waiting while you transfer from one bus to another. More frequent bus service means you don’t have to wait as long for the bus. If bus service is only every 30 or 60 minutes, you could have to wait for up to an hour before you can ride the bus, making the wait the longest part of the trip. Even if you have access to bus service, if a bus trip across town takes over an hour, the service is of little value.

Why is coverage in peripheral areas important?

Transit service is important to many people, and some people depend on it for mobility. Having some level of transit service available to most people, even if it is infrequent, gives people access to the things in Madison that they need. In Madison, many low-income neighborhoods are located in peripheral areas that are hard to serve with direct, frequent transit.

Will total bus service levels be increasing with the Transit Network Redesign?

COVID-19 has introduced a lot of uncertainty, and Metro service has been reduced significantly. However, the current assumption is that things will return to something resembling normal within the next few years. Therefore, total service will likely return to the level it was at in 2019. This means that the existing bus service hours will be rearranged to create a better network, rather than having new service hours added.

Will my bus route or stops be affected?

All bus routes may be affected by the transit network redesign. Most bus stops will not be affected, but may be served by different routes. Metro routinely upgrades bus stops to make them accessible as well as moves them around to be more effectively served. Some bus stops are closed in order to meet our bus stop spacing guidelines, which makes service faster and more reliable.

When will changes take place?

My neighborhood does not have service. Will I get service with the Transit Network Redesign?

It's a possibility. Several Madison area neighborhoods lack all-day bus service. Expanding service to these areas may be accomplished with the Transit Network Redesign. On the other hand, some less productive service areas may be lost in order to increase frequency on main corridors.

Are cities outside Madison included in the redesign?

Yes, cities like Middleton, Verona, Fitchburg, and Sun Prairie, as well as some entities like the UW, participate in the Metro Transit system by funding the bus service in their jurisdictions. Those routes are included in this planning work.

Will this redesign create or increase service to areas outside of the Madison municipal boundary, such as Middleton, Sun Prairie, and Fitchburg?

The network redesign is primarily concerned with service within the existing Metro service area. However, Metro Transit is open to conversations with representatives from neighboring towns and cities to improve services to those communities. There are currently Metro Transit routes reaching areas of Fitchburg, Middleton, Sun Prairie, and Verona. There are plans for the East-West Bus Rapid Transit line to connect to existing Metro service to both Middleton and Sun Prairie.

Will the new transit network use the transfer points and State Street?

The Transit Network Redesign will look at several alternative networks and finally converge on one final design. At least one, if not several alternatives, will look at a network that does not use transfer points. If changes to State Street or other streets are considered that would limit Metro’s ability to provide bus service, then those changes will be incorporated into the plan.

How can I ask questions or share my comments about the project?

You can email staff working on the project at metroredesign@cityofmadison.com or visit mymetrobus.com/redesign for upcoming public meetings. You can also stay up to date by signing up for text/email alerts.

For new meeting updates and the latest information on the Transit Network Redesign: