Twelve years ago, Madison Water Utility began a massive, 40 year effort to overhaul the city’s deteriorating water infrastructure. This month, it will hit a major milestone in that effort – 100 miles of main replaced or re-lined since the utility began its Water Main Replacement Program in 2005.

“In 2005 I couldn’t fathom being at a hundred miles. I thought that was like climbing Mount Everest,” says Madison Water Utility principal engineer Al Larson.

A study commissioned by the utility in 2004 showed that nearly half of the city’s water mains – some 400 miles of underground pipe – needed to be replaced. The utility would have to implement a long-range 40 year plan and start replacing nine to twelve miles a year, at a cost of about $1 million a mile, just to catch up.

“The city expanded and grew quite fast in the middle of the last century, and a lot of water infrastructure was built in a short amount of time,” explains MWU general manager Tom Heikkinen. “Now it’s reaching the end of its useful life. You have to match your effort with that environment.”

Celebrating our 100th mile
Madison Water Utility's 100th mile of main is being installed during a street replacement project on Yuma Drive. The utility will hold a small celebration with neighbors, students from nearby Thoreau Elementary, and MWU employees on Thursday, Sept. 14th at 10 a.m. to mark the milestone. The event will include coffee and "water main" cake. Attendees will be able to sign a 504 lb. section of ductile iron pipe and watch as it's lowered into place six feet below street level. Once the project is complete, the utility expects the new water main to remain in service for 100 years.

You can find out more about Madison’s water infrastructure here: http://www.cityofmadison.com/water/sustainability/infrastructure-overhaul 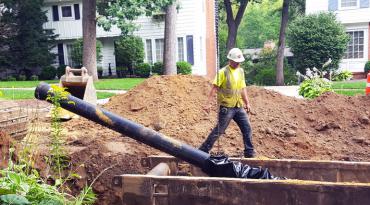