Thanks to the warmer weather, Madison Water Utility has taken its first samples of the year for PFAS testing at municipal Well 15 on East Washington Avenue. Results should be in by the end of February.

The utility had delayed testing at the end of January because extremely cold temperatures meant the samples could have frozen in transit to out of state labs. If a sample freezes, it must be thrown away.

PFAS (or per- and poly-fluoroalkyls) are widely-used chemicals found in food packaging, non-stick cookware, stain-resistant fabrics, and firefighting foams. According to Public Health Madison Dane County pdf , low levels of PFAS detected so far at Well 15 are not considered a threat to public health.

City officials believe the chemicals are likely coming from nearby Truax Air Field, where PFAS were found in shallow groundwater and have been used in firefighting foams.

Madison Water Utility decided to ramp up testing from quarterly to monthly in order to gather more data about whether PFAS levels at the well are changing. October tests showed a 5 part-per-trillion increase from tests run in March of last year.

“We want to see if that’s just variability in the test method, or if that’s some type of increase that we’re seeing,” says Madison Water Utility water quality manager Joe Grande.

Grande also plans to test for more types of the chemicals. Samples will be sent to two different national labs. One will look for 24 types of PFAS, the other will look for 30. The testing is not required under state or federal regulations, and only a limited number of labs across the country can reliably carry out the expanded tests at such low concentrations. 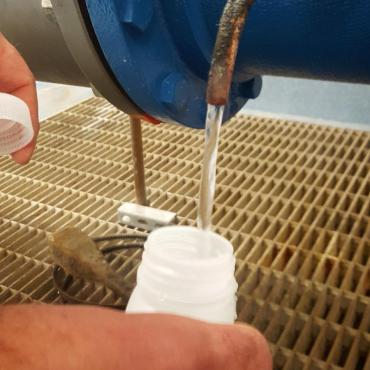