All Streets to be Plowed – No Snow Emergency

Plowing to begin around midnight and expected to last for 14 to 16 hours.

The Streets Division will plow all City of Madison Streets tonight, December 31, and plowing will continue into January 1, 2019. There is no declared snow emergency.

The Streets Division crews along with heavy equipment contractors will begin plowing all city streets around midnight this evening. All Madison streets should have their initial plowing within 14 to 16 hours after the citywide operation commences.

While there is no snow emergency, the Streets Division requests that all Madison residents remove vehicles and trailers from the street if possible. Fewer obstacles in the road means plowing operations will be safer, faster, and more complete.

Parking Information
There is no declared snow emergency in effect tonight. This means that alternate side parking restrictions will only be enforced outside of the Snow Emergency Zone. As a reminder, the Snow Emergency Zone is located on the isthmus between S. Park Street and the Yahara River, plus the Greenbush and Vilas neighborhoods.

Residents within the Snow Emergency Zone are still encouraged to remove their vehicles from the street in order to help with plowing operations.

Additional Information on Plowing Operations
Since the Streets Division will be plowing tonight, it is probable travelers will encounter snowplows working to clear the roads. Be sure to give the operators plenty of space as they work to make the roads safe.

When you are on the roads during the plowing operations, it is common to encounter temporary windrows blocking side streets as crews loop through neighborhoods plowing the snow back to the curb.

Since plowing operations are happening during the night, many residents will wake to their street plowed and driveway apron blocked with snow. Snow in the driveway apron is a regular occurrence during plowing. Plow trucks follow the curb line, and their plow blades are angled toward the curb as well in order to push snow out of the street. Snow builds on the plow blade as they drive forward since the curb does not allow snow to fall off the blade. Gaps in the curb created by driveway aprons means snow falls off the blade and into the apron gap.

Those on the roads tonight should anticipate encountering slippery road conditions – including salt routes. Crews have been looping through the salt routes throughout the afternoon and into the night, but the continuous snowfall has covered over their work. Untreated residential will also be slippery.

All roadway users should also expect to encounter slippery conditions for their Tuesday morning commute and plan on needing additional travel time. The citywide plowing operation is a slow process that can take 14 to 16 hours to complete, therefore some residential streets in Madison may not be completely plowed by the start of typical morning commuting time. 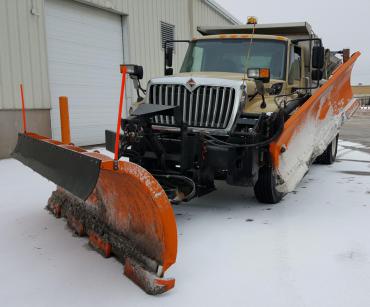