As the next weather maker moves through Friday and Saturday, City Engineering operations crews are ready to clear bike paths in the City of snow this weekend. Clearing bike paths is necessary for use and safety.

As a whole, each snow storm requires coordination between City agencies to remove snow. City agencies, such as the Engineering, Streets and Parks divisions, work together to clear streets, parking lots, bus stops and bike paths. Engineering works in coordination with the Parks Division to maintain bike paths in the City.

As of Jan. 1, 2020, additional funding went into effect to support snow removal on bike paths on weekends and holidays in addition to its regular schedule.

Engineering is responsible for about 26.56 miles of about 61 miles total of bike path in the City. Engineering clears snow on both main arterial paths like the Southwest Bike Path and Cannonball Bike Path, in addition to secondary connector paths, not including on-street bike lanes. Engineering operations crews approach snow removal manually first with construction utility vehicles that have different attachments like brushes and blades.

If conditions call for salt or sand use, operations crews will apply sand first as needed. Crews apply salt as a last resort to address difficult winter conditions. Crews will only use salt and/or sand if snow isn’t able to be removed manually first. Using salt and/or sand is a last resort because City crews are salt certified and are trained to use salt responsibility, minimally and safely when necessary to protect the environment and infrastructure.

Engineering crews will continue to remove snow from bike paths as long as the snow continues to fall.

Snow Removal: It takes a Team

Snow removal wouldn't be possible without a team effort. While Engineering handles 26.56 miles of bike path snow removal, the Parks Division covers the remaining miles with coordination on anything left in between. Coordination between the two divisions is important, and effective for residents.

The other part of the City snow removal team includes the Streets Division.

The Streets Division is the primary agency for treating and plowing the nearly 1,800 miles of traffic lanes of Madison. They also deploy crews to service city-maintained sidewalks, bus pads, alleyways, crosswalks, and more.

To sign up for Snow Plow Updates, visit www.cityofmadison.com/winter. 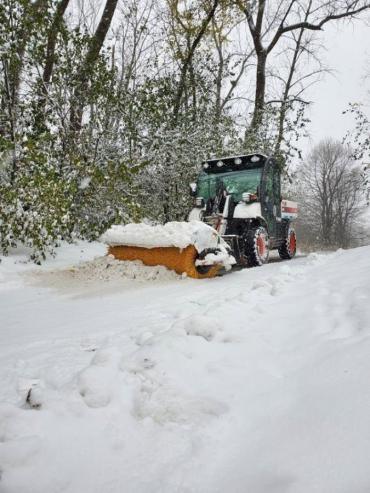 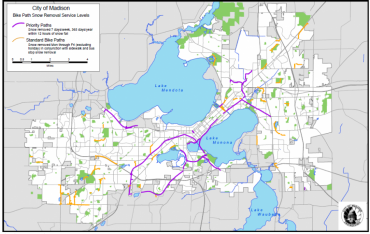