She is raising donations and money for a special camp

“At Camp Kesem they believe that being part of a community with other kids is empowering, comforting, encouraging and inspirational, which I have to agree is true!” said Abbie.

In an effort to give back to the camp she loves, Abbie is raising donations of money and supplies: sunscreen, tie-dye kits, stuff for arts and crafts etc. The project will also help her earn the Silver Award, the highest recognition for a Girl Scout her age.

Recently, MPD officers have been donating money (several hundred dollars) and supplies to Abbie’s campaign. This after MPD Investigator Dan Roman let his brothers and sisters in blue know of Abbie’s cause.

Investigator Roman and his wife have worked with the Girl Scouts for many years, and attended a ceremony where Abbie spoke of her Silver Award project. A cancer survivor himself, Inspector Roman knew he had to get involved.

He showed Abbie some of the supplies officers donated, and presented her with a check, as she received the “Chief’s Coin.” 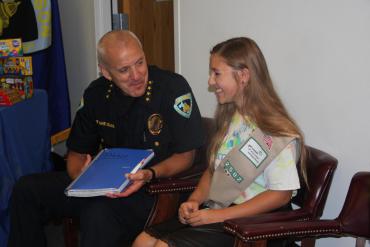