The City of Madison has joined with Saris, a Madison-area manufacturer of cycling accessories and infrastructure products, to launch one of the first municipal pilots in the US of an electric pedal-assist cargo bicycle use in government work. The City will test the use of pedal-assist cargo bikes in different departments and jobs. Users are tracking the miles they ride and answering a short survey about the experience doing their job by bike. This data will help everyone better actualize how they can be used by the City of Madison and other cities around the country.

With Madison’s nationally recognized network of bike paths and routes, employees can take full advantage of this infrastructure to accomplish their work. “We are excited to partner with Saris on this project and see what types of jobs can be done efficiently by bike. These bikes are smaller, more nimble and can be parked and operated in more places than a typical City vehicle,” said Renee Callaway, Pedestrian Bicycle Administrator.

The bike was trialed first by the City of Madison’s Fleet Services to move parts between locations. The City Engineering Department’s Greenway Vegetation Program has begun to use them as well. “The cargo bike has been great for hauling equipment and brush as we do vegetation maintenance along City bike paths and at ponds and greenways. COVID safety restrictions have eliminated vehicle sharing, so the cargo bike has the added bonus of allowing us to get an employee to a site with needed tools and equipment without having to use a personal vehicle!” said Madeline Dumas, Greenway Vegetation Coordinator.

Partnering with global leaders Bosch for the motor and battery and Urban Arrow for the frame design, Saris believes their e-cargo bike can effectively supplement the standard city fleet offerings of a single-occupant car or light-duty truck, and small utility 4x4. Offering distinct advantages over the traditional fleet vehicle, the Saris bike has zero emissions, is significantly lower cost to own and operate, and can be more efficient by utilizing existing bike infrastructure. “We didn’t want this to be just a novelty,” said Mike Basarich, Director of Saris Infrastructure. “We designed our bike to be every bit as useful as a car, truck or 4x4 utility for a range of jobs. Plus, it is healthier for employees and potentially much more efficient. No more fighting for parking spaces or adding to congestion.”

This new transportation option also furthers Madison’s sustainability goals. “The transportation sector is the greatest contributor to greenhouse gas emissions in the City of Madison,” said Stacie Reece, City of Madison Sustainability Coordinator. In addition, tailpipe emissions are the source of significant air pollutants such as particulate matter (PM), nitrogen oxides (NOx) and volatile organic compounds (VOCs). By looking at ways in which City operations can reduce its tailpipe emissions, we can contribute to cleaner air in the community while protecting the planet. The E-Cargo Bike achieves this while also giving City employees a way to enjoy a bike trip on the way to a job site with their equipment in tow.”

“The City of Madison is at the center of a growing societal awareness among cities of the long-term cost of our fossil fuel dependence and resulting carbon emission on the planet,” said Mike Basarich. “They are uniquely positioned to provide leadership to address climate change. Cities like Madison are making commitments to lower and offset their own emissions and reduce their carbon footprint, and we want to give them additional tools to accomplish that for their own constituents as well as humanity as a whole.”

"Fleet is aggressively looking at any and all options available on the market to reduce the carbon footprint of our operations. We enjoyed the demo of a Madison company's prototype both for its positive environmental impact and as a healthy personnel and equipment transport alternative for City staff." Said Mahanth Joishy, Fleet Superintendent.

The City will continue the pilot through late Fall and will evaluate the employee surveys, emissions reductions and other pilot outcomes to determine how electric cargo bikes could best be used by the City in the future. 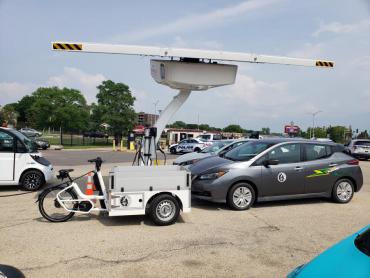 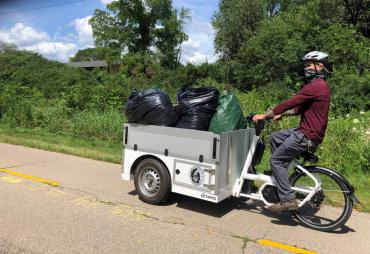