Madison Public Library – Pinney, 204 Cottage Grove Rd., Madison, WI
Saturday, March 18, 1:00pm
“To India! To India!” with a focus on celebrating the culture & arts of India and  stories in Tamil and English

The fun continues with the 5th annual Pinney Mini Film Fest on Saturday, March 18 at the Pinney Library, 204 Cottage Grove Road, Madison. This year the festival is an after-hours event with the doors opening at 6:00pm and a pre-screening performance by the White Birch Ensemble from 6:00pm – 6:30pm. The mini festival will present five short films that screened at the 2016 Wisconsin Film Festival, featuring a Q&A with some of the filmmakers and Wisconsin Film Festival Coordinator Ben Reiser. Films include RUSSIAN FOLK by Director Michael Doubek, A GRAND WALK by Director Sam Wirth, LAKESHORE PRESERVE, with Q&A by Director Austin Moore, IMMOO 240 FRAMES PER SECOND with Q&A by Director Steven Donovan, and WHITE & LAZY, with Q&A by Director James Runde. Willy Street Co-op is generously donating refreshments.

These events are a collaboration between Dane County libraries and the Wisconsin Film Festival, and are funded in part by Beyond the Page, the National Endowment for the Humanities, and the Madison Community Foundation. More information at www.madisonpubliclibrary.org/film-fest and www.beyondthepage.info

About Beyond the Page
Beyond the Page is a joint project of the Dane County Library Service and all municipal public libraries in Dane County.  Supported by a permanent endowment held by the Madison Community Foundation, the project annually funds humanities programming in libraries throughout the county – forever. For more information, visit beyondthepage.info, Beyond the Page on Facebook, or @beyond_the_page on Twitter. 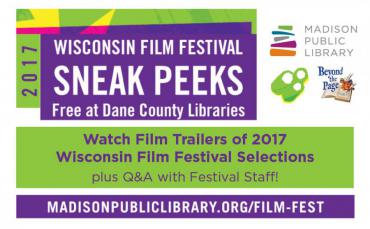