Dedication of The Badger, by Harry Whitehorse

Families strolling around their neighborhood, Bike commuters zipping through the Southwest Commuter path, and UW Badger fans grabbing a brat from the Shriner's on game day may have already noticed the big bronze badger recently added to the City’s public art collection. The Badger created by Harry Whitehorse, adds an fun focal element to the triangle-shaped plaza between Breese Terrace, Regent and Monroe Streets.

One of Harry Whitehorse’s last works, before he died in 2017 at age 90, the piece conveys his love of animals and of children. The Badger was conceptualized as family-friendly work and intended to engage people of all ages. Thus, it is low to the ground, eye-level to a young child, cast in durable bronze, and secured on a rubberized surface for safer interaction.

City Engineer Christy Bachmann, who was part of the Monroe Street Reconstruction project that helped fund The Badger, sees the art as an important part of city building. “We like that our city is unique. Madison residents pay close attention to the environment they live in and we want to offer them positive experiences as they navigate daily life. We appreciate working with artists to bring creativity and beauty to our projects, especially if, in the end, it makes the street feel more welcoming and complete.”

Frank Alfano, who championed this project from the beginning recalls, “I knew Harry and Deb due to having him on a guest panel about growing up in the Greenbush. I had the pleasure of visiting his gallery in his home and found out what an exceptional artist he was. He is the only person that I knew who could work in any medium such as metal wood carvings, oil painting, etc. with an exceptional talent.” He added, “When I was asked to get involved with The Badger I saw it as an opportunity to further recognize Harry's talents and skills within the Madison community”

The City owns another iconic bronze work by Harry Whitehorse titled Let the Great Spirit Soar, located in Hudson Park. The original wood-carved sculpture commissioned by neighbors nearly 30 years ago was placed at Goodman Community Center when, in 2009 a group of dedicated volunteers worked to have the piece repaired, cast in bronze, and replaced on the original site.

On his website, Whitehorse’s bio states, “Harry Whitehorse came into this world in a wigwam near the Indian Mission in Black River Falls, Wisconsin, the traditional home of the Ho-Chunk people. His career in art began at an early age as an apprentice to his uncle, George Seymour, who was an accomplished silversmith, carver, and artist. He learned to fashion small bits of silver into designs taken from nature, hoping to sell them alongside the more advanced work of his teacher.” It goes on to read, “After 90 incredible years of creating, Harry walked on in November 2017. He witnessed history, served his country in WW2, raised 8 children, built and designed race cars, won trap shooting championships, and left us a legacy of beauty inherent in his art. The key to Harry’s art is that it does speak for itself, and it speaks also to the community from which it is created. His carvings, sculptures, and paintings are exceptional: easily understood, expressive of deep emotion, and rooted in a community history and values. For Harry Whitehorse, the closeness to wildlife and his Ho-Chunk heritage are strongly reflected in the fine detail of his brush strokes, in his intricate carvings, and in the cold realism of his metal sculptures.”

Please join us in celebrating this new addition to Madison’s near west side by attending the dedication on Friday, September 13 at 2pm (rain location Hotel Red). Ho-Chunk Gaming Madison is providing funding for the dedication event which will include, Ho-Chunk Nation officials as well as Mayor Satya Rhodes-Conway and Elliott Funmaker & the Wisconsin Dells Singers.

Funding for the sculpture came from City of Madison Engineering, Ho-Chunk Gaming Madison, The Madison Community Foundation and an Art in Public Places Grant from the Madison Arts Commission (MAC). MAC is a municipal commission that funds artistic activities and initiates cultural programs that integrate, support, and advance arts and culture as an essential part of life in Madison. MAC has been proudly supporting murals and other art in public places since 1977. 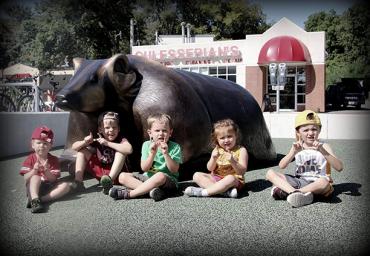