The City of Madison Engineering Division is proud to be a part of the historic unveiling of the City’s first electric fire engine, a first in the nation. Engineering crews are proud to have completed the charging stations to support the new engine and work with the City of Madison Fire Department and manufacturing vendors involved.

Engineering also worked with the manufacturer of the charger and fire engine, in addition to MGE to plan, receive and install the new charger at the building. The charger is the size of a standard photo booth. Engineering crews also ran the pipe and wire from the exterior charger to the interior depot box near the truck. The charging system is split into two parts: the charger and the depot box. The charger is the equipment on the outside of the station that converters the 480 Volt supply power to the voltage and amperage the truck needs to charge. The second part is the depot box, which is in the apparatus bay next to the truck. It controls the charging cable and determines when the truck is able to charge.

Engineering staff also worked on the design that allows for the depot box and charging cord plug to be hung from the ceiling near the charging port for the fire engine and out of the way so it doesn’t block travel in the apparatus bay.

The charger installed for this project is 20 times larger than the chargers installed in the City-County Building downtown which charges Chevy Bolt vehicles.  Finally, Engineering crews worked to troubleshoot the install and make sure all went smoothly. This project is a huge step toward meeting the City’s sustainability goals, and Engineering is proud to have had a hand in a special day in City history. 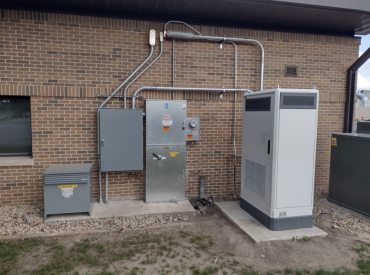 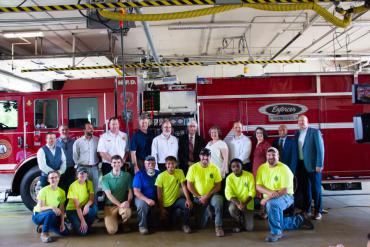