City of Madison firefighters were quick to extinguish an engine compartment fire in a milk truck this afternoon, preventing the spread of fire into an adjacent building.

Firefighters were called to Madison Truck Sales, 3722 Commercial Ave. at 12:22 p.m. Engine 8 and Ladder 8 crews could see a column of black smoke from a mile away. The call first came in as a vehicle fire, but because the truck was just inches from the building, it was upgraded to a 2nd alarm structure fire.

Crews aimed a deck gun at the fire immediately upon arrival, quickly followed by a second crew pulling a 2-1/2" hose line upwind of the fire to keep it from entering the building.
The aggressive tactics resulted in damage being contained to the truck and the bay doors, with minimal damage inside the service shop.

Approximately 50 employees were on scene when the fire began. They self-evacuated before MFD personnel arrived. There were no injuries. Damages are still being calculated.

The cause of the fire is under investigation. 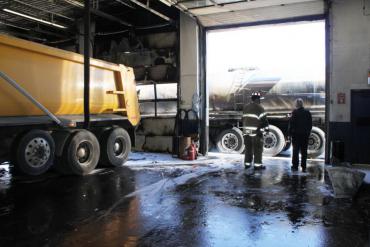 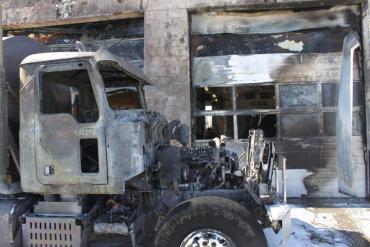