Tuesday morning Mayor Satya Rhodes-Conway “flipped the switch” on a new solar photo-voltaic (PV) installation on the roof of the Madison Municipal Building. The historic building is on the National Register of Historic Places and is now the 29th solar installation at a city facility.

The Mayor noted the work of the Engineering Division’s GreenPower team and discussed how the program is key to moving toward the ultimate goal of 100 percent renewable energy for City operations by 2030. In 2015 the City set a goal of installing 1 MW of solar on City building by 2020. The MMB installation brings the City’s total installed solar to 770 kW. Later this summer the City will reach its 1 Megawatt goal when it complete a 240 kW installation at Madison Metro Transit’s facility.

“Solar energy is a triple win for our community. It creates local jobs, it’s cost effective and transitioning to clean energy is critical to achieving our climate goals” Mayor Rhodes-Conway said. “I am very excited to work with this entire team to set a new even more aggressive goal for the Green Power Program in the future."

With a nod to the sunny day and the panels in the sunshine, the Mayor then “flipped the switch” on the power panel to turn on the solar project.

Madison Municipal Building (MMB) is the 14th solar installation designed and installed by Engineering’s GreenPower program, which brings the City’s total to over 770 kilowatt hours. Bryan Cooper, Principal Architect, Engineering Division, said the 28 kilowatt system at the MMB will produce about six percent of the energy usage at the building and reduce22.4 tons of carbon per year. Solar arrays installed at city facilities are collectively saving an estimated $50,000 - $70,000 in energy costs a year.

The City's IT Media Team has video of today's press conference at:  https://www.youtube.com/watch?v=rcq7Nufkpy8 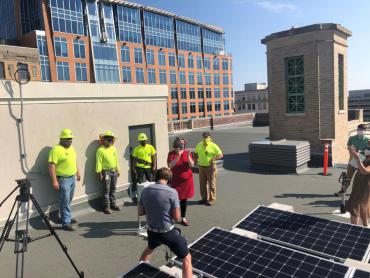