MPD is pleased with the behavior of the vast majority of those who were downtown for Freakfest 2014; however, the sheer number of celebrants in this size of event always gives the department reason for pause and concern.

Ticket sales were estimated at around 35,000, but the MPD estimates the true number of people gathered on State Street, from the State Capitol down to the UW-Madison campus, was closer to 50,000. Thousands were inside the soon-to-be gated area prior to the official Freakfest start, meaning they did not need a ticket.

At the crowd’s peak, one sergeant commented that officers were feeling their ranks to be very thin compared to the large volume of people in the streets. While attitudes and mindsets have changed dramatically from years when the city experienced near riot conditions, the MPD is keenly aware that a large crowd, in an environment where many have been consuming alcohol, could lead to flashpoints and serious problems.

Also - as we look to next year – there will be a trifecta in play: Halloween, Freakfest, and a home Badger football game will all fall on the same Saturday. For all of these reasons, MPD Command Staff believe it imperative that there be no reductions in the number of officers assigned to the event.  Furthermore, they would like to acknowledge the assistance and support of the Dane County Sheriff’s Office deputies needed to assist us in keeping this event safe

Arrests made, and citations issued Saturday by officers working Freakfest have been tabulated. There were 2 people who were taken to jail, while 44 others were cited and released. Most infractions were mostly alcohol related. There were also 11 runs to the Dane County detox center. Officers likely helped save the lives of two drunken people – one young man, one young woman, both of whom were found actively vomiting and unconscious enough not to be able to protect their own airways.

Arrests, citations, and other calls for service did not all take place inside the gated Freakfest zone, but significantly impacted the immediate area surrounding the event.”

Command staff will begin working soon, with event organizers, on planning for next year’s Freakfest. 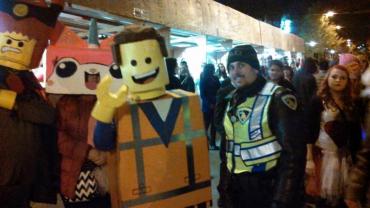