The City’s Greenway Vegetation Coordinator is making a major impact on the way the City approaches greenways and native plantings, and the numbers support the greener spaces.

Maddie Dumas is the City of Madison Engineering Division’s Greenway Vegetation Coordinator, a position added in 2018 for the first time in the Division. The Greenway Vegetation Coordinator cares for the plants growing on all Engineering-owned land in the City of Madison, which a particular focus on bringing back or preserving native plants and removing invasive species.

“The Engineering Division used selective plant removal along with prairie plantings on several greenways and found that we were able to improve the type of greenway vegetation while keeping the cost at or below traditional periodic mowing,” City Engineer Rob Phillips said. “Maddie Dumas was able to advance that effort significantly, and we are very pleased with the result.”

“Green space in urban areas is so precious,” Dumas said. “We have an obligation to have this land fill many roles, stormwater transport and storage of course, but also a refuge for native plants, habitat for wildlife (especially pollinators) and an aesthetic and recreational refuge for residents. The more biodiverse we can make this land, the more resilient our urban ecosystem will be.”

It hasn’t taken long for Dumas to see the fruits of labor from her work and the volunteers and interns she works with daily. In the past year, the volunteers, interns and Dumas tended to the City’s land by doing the following:

Major seed savings for the City

Collecting native seeds has been a new effort for Engineering, but started with Dumas leading by example, and eventually saving the City thousands of dollars. Earlier this summer, Dumas started collecting Spiderwort seed, and ended up not only collecting about $2,000 worth of seed. Dumas reused the seed on ponds, greenways and rain gardens. This past fall, Dumas lead the volunteers and interns in the Division’s first native seed collection season and saved $19,680 worth of native seed, which is money the Engineering Division does not have to use to buy seed from a native plant vendor. 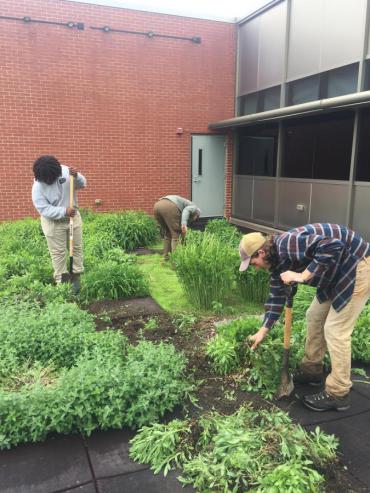