The City of Madison Engineering Division invites the public to the first public information meeting for the upcoming John Nolen Drive Reconstruction Project, 6:30 p.m., Oct. 4, 2021, via Zoom. Registration prior is required.

The City of Madison Engineering Division is working in collaboration with KL Engineering, EQT By Design and Urban Assets Consulting on this project.

The John Nolen Drive Reconstruction project will have a number of structural design improvements along the causeway between North Shore Drive and Olin Avenue.

A number of improvements are being considered, including:
Reconstruction of six bridges along the causeway
Lane configuration and cross section changes
Expansion of the existing path to separate bike path and pedestrian lanes
Shoreline reconstruction along Lake Monona
Pedestrian and bike underpass between North Shore Drive and Broom Street
Reconstruction of storm sewer
Traffic signals and street lighting
Others to be determined through public involvement process

Public engagement is a central element to the planning process for this project. The public involvement process will utilize a range of tools including public meetings and workshops, small group meetings, surveys, event tabling and intercept interviews, and other effective methods proven to ensure the final designs are informed by the community.

A survey will be released in the coming weeks to learn more about what the community wants to see included in this project, in addition to other public engagement opportunities. The City will share the survey when it’s available. 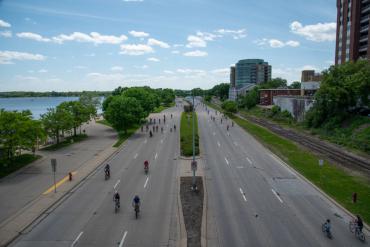