A survey is now open for the community to give direct feedback on the future of John Nolen Drive, including the reconstruction from North Shore Drive to Olin Avenue. The survey is available in English and Spanish.

The purpose of the survey is to gather initial input from the community on their thoughts regarding  John Nolen Drive. The input will be used to develop different options for the roadway, multiuse path, and shoreline design.

John Nolen Reconstruction Goals, Background
The reconstruction will include improvements to the existing roadway and bridges as well as bicycle and pedestrian accommodations. A partial shoreline replacement is also being considered. This project is being planned and designed in conjunction with the ongoing Lake Monona Waterfront Park project, which encompasses both Olin Park and Law Park. Learn more about the Lake Monona Waterfront project.
The survey The survey covers the following topics:
Community use
Access and safety
Physical Modifications
Demographics

Examples of questions include:
“What changes should the city consider to make John Nolen Drive safer for all users?”
“What primary mode of transportation do you use when accessing John Nolen Drive?”
“How safe do you feel when traveling on John Nolen Drive?”
“What are your thoughts about the multiuser path? Is there anything the City can do to make it more usable and appealing for all people?”

Don’t forget to give your feedback during a virtual public information meeting on Oct. 4, 2021. The City, with its project team will be answering questions and hosting engagement breakout rooms to learn more about what the community wants to see in the design process for the future of John Nolen Drive. 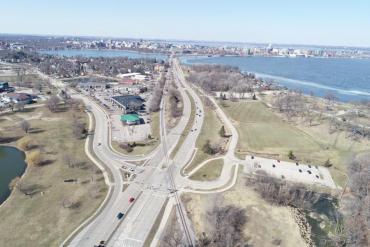