Goats on the Greenways: City Engineering to use Goats for Vegetation Management

This summer, the Engineering Division is trying a new approach to vegetation management for the first time: goats.

Residents may notice goats grazing on the Robin Parkway Greenway on the west side. The greenway is located near the intersection of St. Croix Ln and Gregg Rd north of Mineral Point Road between Midvale and Whitney Way. Residents who live in the immediate area were notified of the project in early July.

The goats arrived on Monday, August 17, and will stay until they have eaten their way through the greenway, which is estimated to take 10 – 14 days.

Benefits of Goats
The goats are grazing in an area that is overgrown with both invasive trees and shrubs, such as honeysuckle, buckthorn, Asian mulberry and young ash or box elder trees, and the highly invasive plant Japanese knotweed. The overgrowth can be problematic for stormwater land. Woody plants can clog storm grates or slow water flow which can lead to flooding. It can also cause erosion when woody plants grow too densely, shading out wildflowers and grasses and leaving bare soil that can easily wash out during intense rain events. Japanese knotweed can spread rapidly, shade out native woodland plants and send roots deep into the ground where they can damage streets, pipes and foundations.
While the cost of grazing is higher than more traditional methods of woody brush control (i.e. cutting with hand tools, brush cutters or chainsaws), there are a few advantages. Nimble goats are able to reach difficult-to-access, i.e. steep or eroding sites, and are less likely to exacerbate erosion while doing so. As anyone who has ever cut a buckthorn shrub, only to watch it return with renewed vigor in a year can attest, simple cutting is not enough to remove most problematic woody species. Cutting is usually followed by applying a dab of herbicide to stumps. Repeated goat grazing, however, may be able to curb woody plant growth enough that herbicides are not needed as the animal continually eats off new plant growth, exhausting plant energy reserves. Goat grazing can also be used as a precursor to more traditional methods to reduce human labor on a site.

How the Goats Eat
The goats will typically eat woody plants instead of grassy green plants. Goats will eat the leaves off woody plants, stressing and weakening plant. Goats can further weaken undesirable woody plants by yanking, climbing or stripping bark off of them. Once the goats have worked through the greenway, Engineering will follow-up by sowing native woodland wildflower and grass seed and/or planting native trees and shrubs as necessary.
The herd of roughly 40 mother and baby goats are employees of Haakhagen Goats out of Poynette, WI. Some of the same goats from this herd may have been seen around town this summer as they grazed at several Madison Parks, including Acewood Park, Greenside Park, and Olin Park.

According to Greg Haak of Haakhagen goats, the goats rarely escape and prefer to remain with their herd contentedly eating away our problematic species. Occasionally deer can knock down fencing. Residents often ask about coyotes, and while they could pose a danger to the goats, the electric fencing is a strong deterrent and Haakhagen has never experienced an issue with coyotes. Deer may knock down fencing when moving through the area. To ensure the security of the fence and the health of the goats, City Engineering staff walk the fence twice a day, in morning and evening, and refill the water tank as needed.

If you go to visit the goats please be sure to stay back from the electric fence and do not touch or feed the goats. 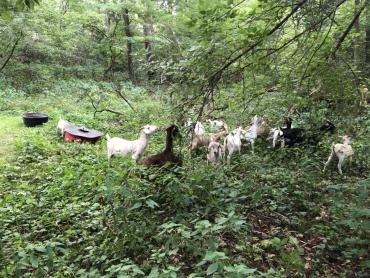