The Madison Police Department is excited to announce an $850,000 federal grant which has just been awarded to fight crime and build stronger neighborhoods in Southwest Madison.

“We are extremely excited to have a real opportunity to do some tremendous grassroots work in some very deserving areas of the West District,” said Lt. Mike Hanson who helped lead a team that worked over the past two years to secure the grant.

The MPD has been working with two outstanding partners on this project: Common Wealth Development and the University of Wisconsin – Extension. The grant is coming from the United States Department of Justice Byrne Criminal Justice Innovation program which previously awarded the MPD and its partners a $155,522 planning grant two years ago. That money was used to pull together resources, do research, and lay groundwork to show what the City of Madison would do should it be awarded the larger grant. Those running the Byrne Criminal Justice Innovation program liked what they saw.

The “Southwest Madison: Our Neighborhood, A Safe and Beautiful Place” project will focus on planning-phase identified hotspots for crime and victimization: in and around the Raymond Road area, the apartments along Park Edge and Park Ridge Drives, and the Waterleaf Apartments.

The $850,000 will now be used to implement the strategies developed during the planning phase.

The grant partners will lead a community-driven process to determine exact unmet needs and desired programming to help address them.
The goal is to build better community cohesion while reducing crime. Successful outcomes will involve a multifaceted approach, and could include:

“These efforts through the Byrne Criminal Justice Innovation grant are only the first few steps in enhancing the work that is already occurring in the Meadowood, Prairie Hills and Park Edge/Park Ridge neighborhoods. Long term sustainability of funding, involvement of the many diverse residents of the neighborhoods and ongoing political support is what is required to make all of our neighborhoods Safe and Beautiful places within the City of Madison,” summarized Stephanie Bradley Wilson, Common Wealth’s project manager for the initiative. 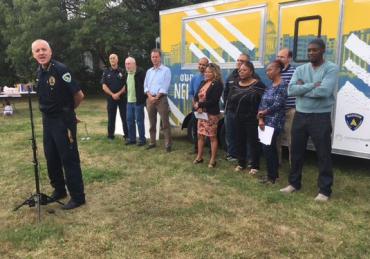