It’s been about one month since a team of master electricians from the Madison area got back from a trip that took their skills to an international level.

The City of Madison Engineering Division sent its master electrician, Matt Parks, to Puerto Rico to replicate the City’s Green Power program. Parks made the trip with two other electricians from partnering organizations to teach a crew in Puerto Rico the skills to install solar energy.

The idea for the trip came to be in May 2018. Toa Baja, Puerto Rico Mayor Bernardo Márquez García came to Madison to meet with City officials about a number of concerns the island community was facing, especially after Hurricane Maria. Hurricane Maria was a Category 5 hurricane that devastated Dominica, the U.S. Virgin Islands and Puerto Rico in September 2017. After the meeting, it was decided, the City of Madison’s Green Power program would be replicated in Puerto Rico.

The Green Power program started as a pilot program in 2016 in the City of Madison. Through the program, trainees with little or no prior electrical skills, learn solar job installation skills as part of a crew working to install PV systems on City of Madison facilities to help the City meet its goal of 1 Megawatt of self-generated renewable energy by 2020.

The trip to Puerto Rico

The City of Madison partnered with Midwest Renewable Energy Association and North Wind Renewable Energy Cooperative to send a crew down to the island to teach people how to install solar electrical systems.

The three were in Puerto Rico from March 7-13, 2019. They helped a crew install a solar energy panel system on the roof of the Candelaria Community Center. The building was very important to the residents of Toa Baja, because it was one of only a few city buildings not flooded from Hurricane Maria. The building was used for shelter, contains emergency supplies, food and water.

Twelve people participated in the program: six municipal employees and six local tech college students. All but two had prior electrical or construction experience. The group installed an 8.4 kW solar system on the a community center and adjacent Emergency Management Office, to provide enough power to operate their radios, computer, and recharge cell phones.

The project was funded a number of ways: $25,000 donation to the MREA by Cal and Laurie Couillard, the founders of the Couillard Solar Foundation.  North Wind Renewable Energy Cooperative in Steven Point provided equipment design and logistical support. The City of Madison provided time, transportation, and room and board for Parks.

The project was a great success and a true team effort. The Mayor of Toa Baja expressed his gratitude to the whole team and to the City of Madison for support and generosity. 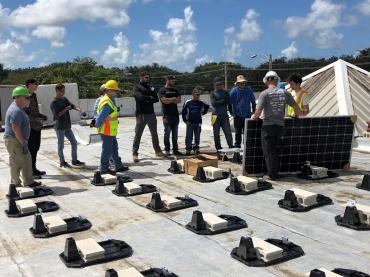 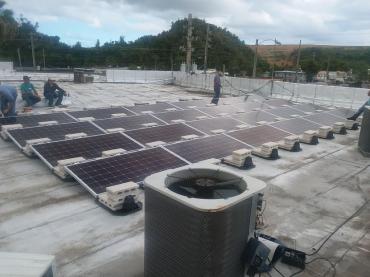