The contest, which began in May of this year, received over 300 photo submissions. Each photo was reviewed and graded on factors such as artistic excellence and overall impact, and of course, the photo must have been taken in or of a City of Madison park.

One of the judges, Judy Frankel, Director of Public Relations and Communications for the Greater Madison Convention & Visitors Bureau, said, “Madison parks offer so many photo opportunities. The quality and variety of photos (received) was quite impressive. There were such creative and unique ways in which the park spaces were presented. I was honored to be a part of this project and amazed by the amount of incredible spaces we have to enjoy. ”

Madison Parks Superintendent, Eric Knepp, said “The 2017 Madison Parks Calendar captures our park system across every season.  The calendar offers a great opportunity for community members to directly engage in promoting the beauty and value of our shared treasure.  Madison Parks is proud to give a voice to these stories”

The high-quality, spiral-bound calendar sells for just $10 (tax included) with all proceeds going to the Madison Parks Foundation.  Calendars are available for purchase by calling (608)266-4711 or by stopping by Warner Park Community Recreation Center or the Parks Administrative Office. 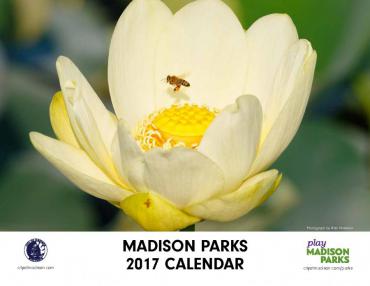 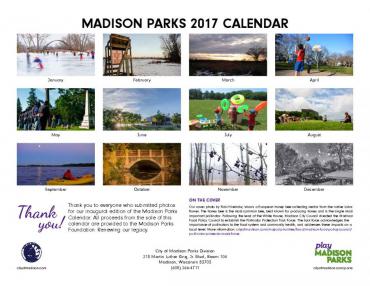