The kids are offered a full week of activities, scenarios and demonstrations in which area officers explain and coach the kids in police work. Agencies partnering with the Madison Police department to hold the academy include the Fitchburg Police Department, the Sun Prairie Police Department, the Middleton Police Department and the 115th Fighter Wing. The Boys and Girls Club of Dane County is also providing transportation for many of the kids.

By holding the Black Youth Academy the past five years, the Madison Police Department has forged lasting relationships with the youth of Madison and suburban communities, benefiting the officers as much as the youth.

Lt. Chalecki has been with the academy since it started and has witnessed the benefits of the program first-hand.

“We’ve had major incidents where a youth victim will be reticent to speak with officers until an officer from the academy shows up, then it’s all hugs,” she said. “Being able to help kids not only learn about our mission as officers but also have these lasting friendships within the community has paid dividends over and over these past five years.” 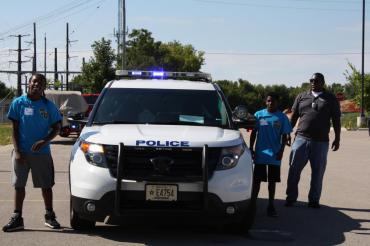