Madison Firefighter Chad Workman is a 2016 recipient of a National Preparedness Award from the United States Department of Defense. Workman, a Senior Master Sergeant with the 115th Civil Engineer Squadron at the 115th Fighter Wing of the Wisconsin National Guard, was the sole recipient in the Individual Reserve Component category.

Celebrated for his leadership, innovation, initiative, and resourcefulness, Workman was honored at a ceremony hosted at The Pentagon in Washington, D.C., on September 21, 2017. He is credited for establishing and training a 30-member urban search and rescue team for the State of Wisconsin. He also developed a response model that other states are beginning to utilize during man-made and natural disasters.

When violent storms and hurricane-force winds ripped through northern Wisconsin in 2016, Workman led reconstitution activities, such as debris removal, as part of a National Guard response to the area. His insights on improving debris clearance operations, as well as procuring funding and equipment for future disaster-related deployments, is among the many reasons the U.S. Department of Defense chose him for this prestigious award.

“We’re proud to have one of our members recognized for such a distinguished honor,” said Fire Chief Steven Davis. “This recognition speaks volumes about the quality of people serving in the City of Madison Fire Department.”

Based at Fire Station 1 in downtown Madison, Firefighter Workman is also a rescue diver with the Madison Fire Department’s Lake Rescue Team. He served as a training officer during two Madison Fire Recruit Academies since he was first hired to the department in April 2008. He deployed twice to Iraq, most recently in September 2009. 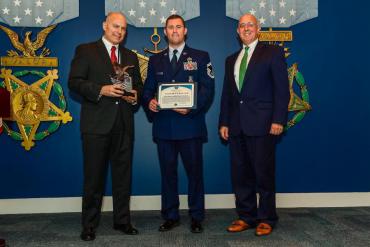