The City of Madison Engineering Division is proud to announce its earning of two awards for its work restoring the Madison Municipal Building (MMB) last year.

The MMB earned the 2019 Madison Trust for Historic Preservation Restoration Award and was honored as one of the Daily Reporter’s Top Projects of 2018.

The MMB is a designated local City of Madison Landmark and is individually listed on the National Register of Historic Places. It was originally built from 1927 to 1929.

In 2014, the City of Madison Common Council affirmed through resolution that keeping the MMB in civic use would help achieve the City’s desire to maintain a nexus of City offices together. It took four years to complete the restoration and renovation. The MMB also met Leadership in Energy and Environmental Design (LEED) requirements and is targeted for a LEED Gold rating.

During the restoration, the following was completed: 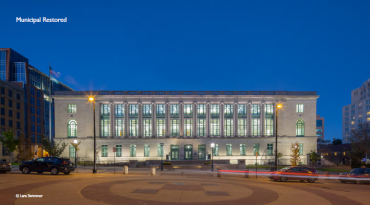