It was a busy day for officers, as the Madison Police Department assisted with several major events throughout the city on Saturday.

The day started with officers working the Crazylegs Classic race. They blocked traffic as thousands of runners and walkers moved along the race route.

Shortly after the start of the race, people began gathering for the Mifflin Street Student Block Party.

Around 11:45 a.m., a second-story porch collapsed along the 500 block of Mifflin Street. Two people were taken to the hospital and suffered non-life-threatening injuries.

The Madison Fire Department and Madison Building Inspection were called to the scene to help those injured and assess property damage. There is no official cause for the collapse at this time, but a large number of residents were seen crowded onto the structure moments prior to its collapse.

By midday, the crowd on Mifflin Street surged to well over 10,000 people. In response, the Madison Police Department closed Mifflin Street and other nearby streets in order to keep people safe.

Attendees were in good spirits and cooperative with officers patrolling the area. Heavy rain showers quelled the party while soaking officers working the area.

Over the course of the day, around 45 people were arrested and one person required transport to the Dane County Jail.

Members of MPD also assisted as dozens gathered for the Election Integrity Rally. Around 70 vehicles paraded from E. Washington Avenue onto the Capitol Square on Saturday afternoon. The rally attendees parked legally and gathered outside of the Capitol to listen to a number of speakers.

The Department would also like to thank the Dane County Sheriff’s Office, UW-Madison Police, Capitol Police, the Madison Fire Department and the Streets Department for their assistance. 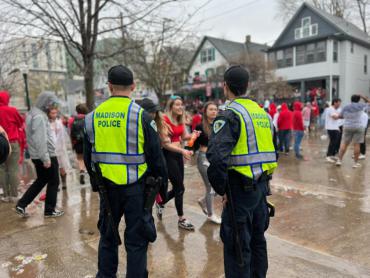 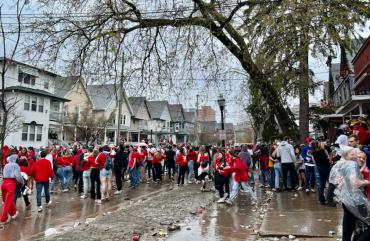