At its meeting tonight, the Madison Water Utility Board heard from utility staff, Public Health Madison Dane County, and concerned residents about PFAS. The widely-used chemicals have been detected at two wells – Well 16 on Mineral Point Rd. and Well 15 off East Washington Avenue. Residents were most concerned about Well 15, where six different types of PFAS chemicals have been detected. The chemicals are likely coming from Truax Air Field, where PFAS-containing firefighting foams have been used. The air field is about a mile away from Well 15.

Although the chemicals are not regulated in drinking water in Wisconsin, the EPA has set a Health Advisory Level for two types, PFOA and PFOS, at 70 parts per trillion. The amount of PFOA and PFOS detected at Well 15 is 11 parts-per-trillion.

All members of the public who spoke at the meeting insisted that the EPA Health Advisory Level isn’t strong enough. Many were also concerned that not enough people in the Well 15 service area are getting information about the issue, particularly people living in apartments who don’t receive water bills or have regular communication with Madison Water Utility. Others felt that the issue extends well beyond the purview of the utility and pushed for the creation of a task force made up of agencies at the city, county, state and possibly federal level

In response to the comments from community members and information from MWU staff, the Madison Water Utility Board took the following actions:

Alders Ahrens and Rummel also stated that they would introduce action at the Common Council to create a PFAS task force, bringing together city, county and state agencies to address the issue. They hope to also include officials from the Wisconsin Air National Guard.

You can find information presented at the meeting by MWU water quality manager Joe Grande on the PFAS Testing and Information page. You can also find out which wells serve your address here. 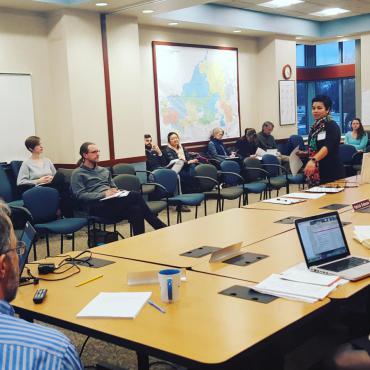