Alder Tim Gruber, Parks Superintendent Eric Knepp along with the Madison Friends of Pickleball and the community will officially open the pickleball courts at Garner Park with a ribbon cutting ceremony on Thursday, September 15 at 5:30pm.

In the spring of 2016, Madison Friends of Pickleball was formed and quickly began raising the necessary funds in partnership with the Madison Parks Foundation. The group raised a little more than $44,000 from individual gifts and grants, with the most generous grant from the Irwin A. and Robert D. Goodman Foundation.

Garner Park tennis courts were selected and construction for the Tennis-to-Pickleball Court Conversion project began in July. The project involved partial removal, patchwork and sealing of the existing asphalt, removal of posts and fencing, installing a total of six pickleball nets/posts, new center dividing fence and gate, a total of 8 new benches plus color and striping to create six pickleball courts.

This project has created Madison’s first dedicated pickleball court complex. Pickleball is a blend of tennis, badminton and table tennis played with a small paddle and wiffle ball on a badminton-sized court. The Friends of Pickleball are providing event goers with a light refreshment and playing tips for those interested in trying the sport.  Garner Park is located at 333 S. Rosa Road and is open daily 4:00am to 10:00pm. 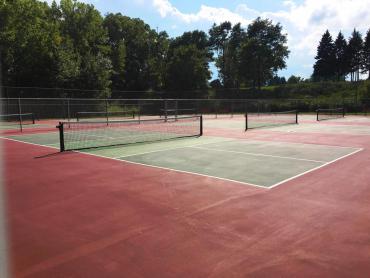