The City’s newest and most powerful solar project was officially turned on Dec. 17, 2019, during a press conference, after Mayor Satya Rhodes-Conway “Flipped the Switch” at Madison Metro Transit, located just off of East Washington Avenue.

GreenPower is a program housed in Engineering, where people with little to no electrical experience learn how to install solar in a six-to-nine month program. After the trainees complete the program, they are better prepared to go into a career in the solar industry, earn an electrician apprenticeship or a career with the City of Madison.

On Dec. 17, 2019, the Engineering Division hosted a press conference to share information about GreenPower, its impact, the City’s vision and continued commitment to solar and to receive a check from Focus on Energy for its solar efforts. A number of City stakeholders spoke at the press conference including: City Engineering Public Information Officer Hannah Mohelnitzky, Madison Mayor Satya Rhodes-Conway, City of Madison Transportation Director Tom Lynch and Focus on Energy Energy Advisor, Joel Roltgen.

The Mayor thanked the Engineering Division for its work installing solar and explained how installing solar panels and having programs like GreenPower move the City toward its goal of 100 percent renewable energy for City operations by 2030.

“Solar energy is a triple win for the community. It creates local jobs. It’s cost effective. It’s critical in achieving our climate goals and transitioning to clean energy sources,” Mayor Rhodes-Conway said. “…Installing solar panels on our own facilities will help us meet that goal while growing our local talent pool in the solar industry, which is necessary to help the rest of the City meet that goal.”

Joel Roltgen, of Focus on Energy, presented the Mayor with a $33,090.86 incentive check that will go toward future solar PV installations and energy efficiency improvements at City facilities.

“Madison has really helped with the great initiative, in making the Wisconsin Focus on Energy Program the most cost-effective, statewide energy efficiency program in the nation, according to Berkeley Lab,” Roltgen said.

The Mayor then walked outside the garage, and “flipped the switch” on the power panel to turn on the solar project.

The project details
The Metro Bus Garage Solar Project is the thirteenth solar installation designed and installed by Engineering’s GreenPower program, which brings the City’s total to 743 kilowatt hours. In 2020, GreenPower will install a 28 kilowatt system at the Madison Municipal Building, and then install an additional 240 kilowatt system to push the City toward its 2020 goal of one megawatt of solar installed on City facilities.

The Metro roof project has 334 solar panels, one inverter and is expected to offset 98 metric tons of Carbon Dioxide each year. 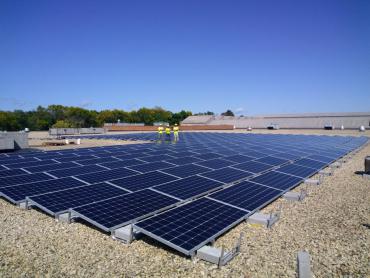