City Clerk Maribeth Witzel-Behl joined Madison Mayor Paul Soglin today to report that Madisonians are again turning out at the polls in advance of next week’s election. With absentee voting available at 15 locations throughout the City, including three on the UW Madison campus and at Edgewood College, over 4.6% of registered voters have exercised their right to vote in advance of next Tuesday’s election. With voting continuing through this week, we are expected to reach a new record for absentee voting in a non-presidential April election.

“Voter turnout in the February 2018 primary was higher than any other non-presidential February primary in the city of Madison with 29.4% turnout on February 20. Said Mayor Soglin. “We know our April turnout is even higher.”

There is a statewide race for Supreme Court on the ballet as well as races for County Board seats and a number of school board races.

“We have about 1,800 election officials working in April, and we are preparing supplies for 87 polling locations,” said Witzel-Behl. “The planning and staffing needed even for a non-presidential election is pretty substantial.”

Below is a partial list of City Clerk duties prior to, and on, Election Day.

Although work begins weeks earlier, below is a list of duties and responsibilities of the Madison Clerk’s office four weeks prior, and through the spring election.
Four weeks before spring election

One week before spring election 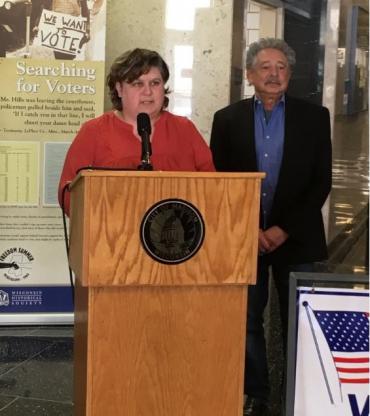