Madison, WI – Monona Terrace launched an inscribed tile campaign back in 1996 to support the construction of the facility which opened in July of 1997.  The campaign was met with resounding community support resulting in over 10,000 tiles sold and one million dollars in sales.  Now, almost two decades later, due to high public demand, Madison fans from all over the world will again have an opportunity to personalize their own little piece of the Frank Lloyd Wright-designed convention center.  This time, the proceeds from sales will support the hundreds of free and low-cost community and tourism programs and tours produced at the facility each year, which serve over 52,000 people annually.
Tile purchase is tax deductible as allowed and priced at $125 for the rooftop and $1,000 for Olin Terrace.  Tiles can be ordered through the Monona Terrace Gift Shop.  Tiles ordered by August 1st will be installed in fall of 2014.  The next installation is scheduled for spring 2015.  Tile location will be assigned by Monona Terrace.
Monona Terrace is located at One John Nolen Drive in Madison. Monona Terrace hosts approximately 600 client events each year resulting in over $52 million in annual economic impact for the community. The Frank Lloyd Wright designed  facility has a mission to be a high quality, customer focused convention and meeting facility that serves as a community gathering place, a tourism destination and a catalyst for economic activity for the City of Madison, Dane County and the State of Wisconsin. For further information, call (608) 261-4000, TTY (608) 261-4150 or visit our website at http://mononaterrace.com. 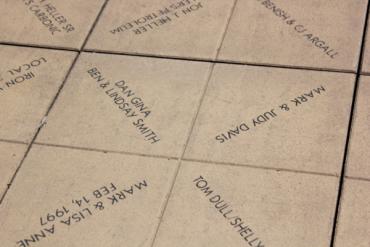