North District Neighborhood Police Officers are again collaborating with the Vera Court Neighborhood Center to bring Rocket Club to some of our Northside kids. Now in its third year, Rocket Club has become a favorite of the Center’s summer program for kids. The district officers, with help from the Madison Community Policing Foundation are excited to sponsor the program. In keeping with MPD’s core values, this is just one example of team building, community partnership and positive engagement with youth.

This year Rocket Club is focusing on the 50th anniversary of Apollo 11’s epic journey to the moon. On Tuesday, July 16, 2019, at 8:32 am the club will re-enact the launch of Apollo 11. This will be fifty years to the minute after the historic mission was launched at Cape Kennedy. The kids will be sending aloft a 1/100th scale model of the Saturn V at that time. Following what we trust will be a successful flight, the club plans to celebrate Apollo 11 with a “Mooncakes” and Tang breakfast.

The commemorative event will take place just behind the Vera Court Neighborhood Center at 614 Vera Court. 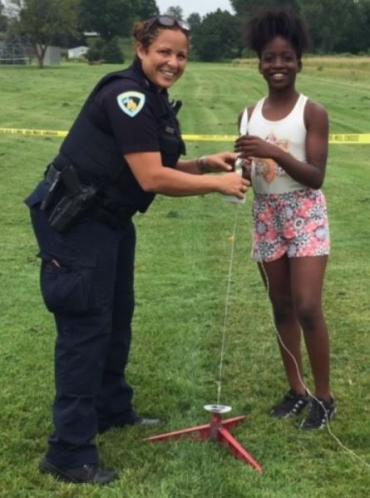