This year, the department was focused on reducing shots fired calls, stolen auto incidents and hazardous driving, specifically on the Beltline, Mineral Point Road and East Washington Avenue. The hope was to see a 15% reduction in each of these areas.

As compared to last year, our analysis shows a 5% decrease in stolen autos, a 21% decrease in shots fired calls and an average of a 23% reduction on injury accidents on our targeted roads.

The summer strategic plan began on June 1 and ran through October. The plan’s effectiveness was then reviewed and studied by department leadership.

Stolen Autos Incidents
The Madison Police Department saw a 5% decrease in the number of stolen auto cases. While falling short of this year’s goal, it is an improvement from last year, when the number of cases increased.

The summer strategic plan covered the months where there was a nationwide spike in people stealing Kia and Hyundai models. In Madison alone, there was a 270% increase in the theft of these particular vehicle brands.

Being proactive, officers and command staff hosted a wheel-lock giveaway and visited apartment complexes in the city, warning people of this problem.

Nearly a third of stolen autos were also left running or had their keys inside at the time of the theft.

Seventy people were arrested during this operation for stolen autos. Of those arrested, 12 were repeat offenders and 38% were under the age of 18.

Under the 2022 summer strategic plan, stolen auto cases were assigned to detectives in the Burglary Crimes Unit. This policy will remain in place going forward.

Shots Fired Calls
The Madison Police Department saw a 21% reduction in the number of shots fired calls this summer.

In order to meet this goal, employees worked daily to identify hot spots. Data analysts reviewed these incidents in real time and notified department leadership immediately when a problem area emerged. This year, no shots fired hot spots were identified.

“Even though the data shows things are trending in the right direction, we know fear of crime still exists. And that’s something we take to heart,” Barnes said. “We share these numbers to be transparent with our public. And we want our community to know we work hard every day to police the right way to make sure we have a safe Madison.”

Officers seized 168 firearms as evidence of a crime between June and October.

The department also reported a 21% reduction in shots fired calls from the 5-year average.

When it comes to hazardous driving, the department hoped to see a 15% reduction in injury crashes on the Beltline, Mineral Point Road and East Washington Avenue.

Traffic enforcement increased along these roads too. Officers specifically looked for driving behaviors – such as speeding and zooming in and out of traffic – that could lead to injury crashes.

“Speeding. It’s a top concern for people in our community. We know that," Barnes said. "Which is why our officers did extra patrols on these problem roads while still monitoring safe driving in our neighborhoods."

Madison’s Vision Zero project, which looks to improve transportation concerns in the city, helped the department decide which roads to focus on during the summer strategic plan.

“We met some of our goals this year. And that’s a good thing," Barnes said. "But there is still more work that needs to be done and that’s what we are focused on now." 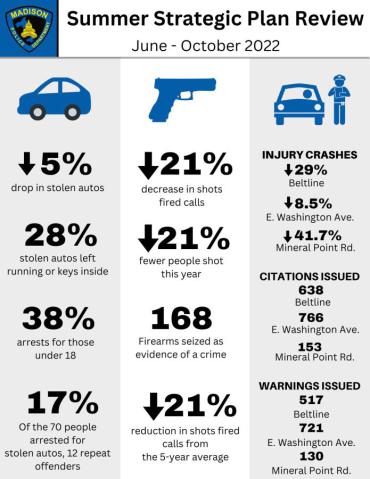