Thomas Ferrella is a Wisconsin-based artist who conceptualizes a piece or a body of work based on visual clues and their subsequent sensory perception. He speculates in a variety of artistic mediums, frequently commenting on and responding to social and environmental causes using truth as his guide. Photography has been the foundation though he willfully strays into music, video, painting, large scale installations, sculpting in wood and found objects. His art is as free as is his interpretation of the world. Everything is fair game.

Common threads exist though he considers them irrelevant. His aesthetic is a natural abstraction, a graphic documentation, a personal dialogue, an invitation to poetry.

Alfred Rasho worked as an independent filmmaker in Chicago for over thirty-five years. In 2001, while working as Director of Photography on a PBS documentary film in Sudan and Egypt, he first made an exploratory trip with just a still camera. This experience renewed his love for the still image. With photography, “I felt more connected to my subject. I was able to take his eye away from the viewfinder and feel a sense of place”. 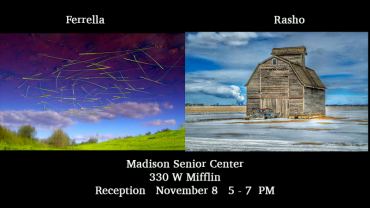