At 3:37 p.m. Thursday afternoon a group of 50-75 protesters moved into the office building located at 660 John Nolen Dr. occupying common areas and creating disturbances. This is a private building with several businesses inside. The management of the building asked the protesters to leave the building, which they did after a short time.

Members of the same protest group then moved onto the frontage road of John Nolen Dr. and entered the intersection of John Nolen Dr. and Rimrock Rd. blocking traffic. A subset of that group then sat down in the intersection and placed their arms into PVC pipe with chains and bolts inside in order to prevent officers from separating them. The entire protest group was immediately and repeatedly warned that they could not occupy the roadway or they would be arrested. Traffic volume at this time was extremely heavy as rush hour was occurring in Madison. Most of the protesters cooperated with these warnings, but a smaller group with the pipes and chains did remain in the center of the intersection of Rimrock Rd. from 4:30 p.m. until approximately 6:30 p.m.

While the majority of the group cooperated when asked to leave the roadway, the subset that chose to obstruct traffic created a significant traffic delay and also created a safety hazard for motorists and citizens. Examples of safety hazards created include several near crashes, delaying persons wishing to seek cancer treatment at a clinic off of John Nolen Dr., a citizen wishing to take insulin for their health condition who was staying at the Sheraton and several ambulances in emergency mode wishing to take persons to the hospitals downtown.

Officers faced 94 degree weather during the first hour of the protest. Water provided to officers to prevent them from overheating in their bullet-proof vests and more than 30 lbs of gear was also shared with protesters for their wellbeing at the officer’s request. Officers also faced rain and hail while protecting the protesters from vehicles. Normal response by the police department to storm damage and assist citizens was delayed due to the resources consumed by the protest.

Officers were unable to clear the Rimrock Rd. and John Nolen Dr. intersection in a timely manner due to waiting for the proper equipment to remove the pipes and chains from the protester’s arms since the protesters would not voluntarily do so or follow the directives from the officers.

There were ten arrests made for charges including obstructing the roadway and resisting/obstructing officers. 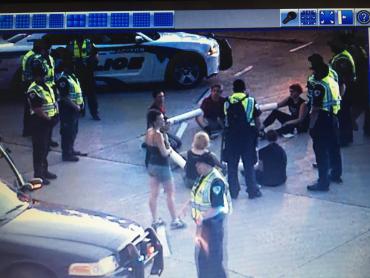 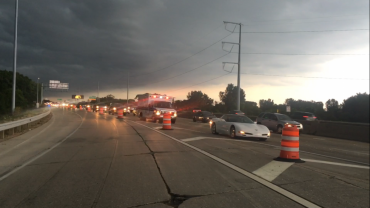