The City of Madison will not waver in its efforts to protect the rights of everyone within our jurisdiction, regardless of status, while maintaining the core values of the Madison Police Department.

The constitutional principle is very simple: we are not employees or agents of the federal government, particularly Immigration and Customs Enforcement.

We will not use our local police department as a tool to enforce federal immigration laws. The trust between our police department and the people we serve is more important than our violating the constitution and improperly detaining individuals. If we stop someone for a traffic violation or a misdemeanor, we have no right to compromise that person’s freedom through detention without a lawful court order.

We will cooperate with immigration federal authorities when legal; that means complying with a constitutional detainer request, which is most likely to occur when a serious crime or felony occurs, such as an assault.

Nowhere in our agreements with the federal government - housing, transportation, health, economic development or public safety does it state that as a recipient of federal funds, that we agreed to illegally or unconstitutionally detain individuals. We will vigorously contest any attempt by the Trump Administration to deprive Madison of funding, especially when unconstitutionally coerced.

I want to recognize that there is a conversation over the technicality of what constitutes a "sanctuary city."

This has been noted by the United States Conference of Mayors and by the American Immigration Council. Some argue that to truly be a sanctuary city there must be no compliance with the federal government, even when presented with a proper detainer, as in an instance where an individual has been apprehended for a felony. By that standard, we are not a sanctuary city. I note that many cities that call themselves sanctuary cities apply that standard as outlined in statements from New York, Los Angeles, and Seattle.

We will continue to operate as I have described which is consistent with the Statement of Sanctuary adopted by the Madison City Council on June 1, 2010. That statement, in part, states that the city will resist using local law enforcement to enforce federal immigration law because it engenders "an atmosphere of divisiveness, fear and mistrust that is unhealthy for our society, and especially harmful for a diverse community like Madison…instead of making the communities safer, these efforts have had the effect of alienating the immigrant communities and reducing cooperation with the police, creating fear, discouraging the reporting of crime, and victimizing victims." 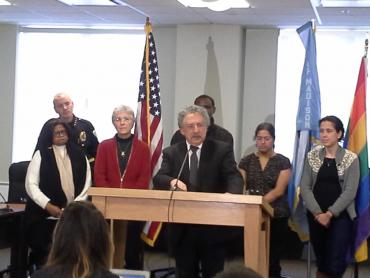